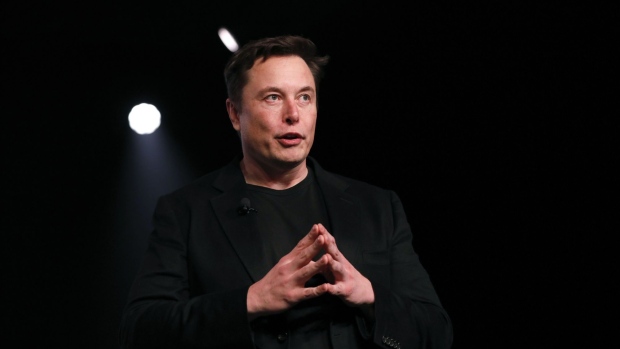 Elon Musk, co-founder and chief executive officer of Tesla Inc., speaks during an unveiling event for the Tesla Model Y crossover electric vehicle in Hawthorne, California, U.S., on Friday, March 15, 2019. Musk said the cheaper electric crossover sports utility vehicle (SUV) will be available from the spring of 2021. The vehicle's price will start at $39,000, a longer-range version will cost $47,000. , Bloomberg

(Bloomberg) -- Twitter Inc. executives told employees on Thursday that the $44 billion deal to sell the company to billionaire Elon Musk is moving forward as planned, and that it won’t renegotiate the agreed-upon price of $54.20 per share.

Vijaya Gadde, Twitter’s top lawyer and head of policy, also told workers at an all-hands meeting that there is “no such thing as a deal being on hold,” according to people who attended the meeting. She was pushing back on claims from Musk over the past week that he is pausing the deal while he learns more about the number of bots and spam accounts on the social-media service.

Other top Twitter executives, including Chief Executive Officer Parag Agrawal and finance chief Ned Segal, also addressed employees, said the people, who asked not to be identified discussing internal business. The companywide video call was intended for leadership to discuss the deal and provide more details following Twitter’s filing of its proxy statement with the Securities and Exchange Commission, which outlined the transaction’s history and terms.

Segal on Thursday told employees that Twitter executives are still engaging with Musk and his team, and working with them “regularly” throughout the process.