Elon Musk joked on Twitter about buying Manchester United Plc, letting 4 1/2 hours go by before clarifying he was kidding about purchasing the English football club listed on the New York Stock Exchange.

The world’s richest person sent his initial missive about the storied club in a reply to an earlier post about his political allegiances. When a Tesla Inc. fan account asked whether Musk was serious, he replied no, he isn’t buying any sports teams.

No, this is a long-running joke on Twitter. I’m not buying any sports teams.

Bloomberg News reported hours after Musk’s posts that the Glazer family that’s owned Manchester United since 2005 would consider selling a minority stake, citing people familiar with the matter. The club’s shares rose as much as 7.6 per cent to US$13.75 shortly after the start of regular trading Wednesday.

Musk has a long track record of tweeting in jest. He’s also run afoul of the US Securities and Exchange Commission, most infamously by claiming in 2018 he had the funding to take Tesla private. That led to securities fraud charges and a settlement agreement that Tesla would appoint an in-house “Twitter sitter” who would pre-approve posts containing material information about the company.

More recently, Musk got the SEC’s attention with a May 17 tweet saying his $44 billion takeover of Twitter Inc. couldn’t move forward until its CEO proved claims about the number of bots on the service were accurate. In a June 2 letter, the agency asked why Musk didn’t amend an earlier SEC filing to reflect an apparent material change in his plan to acquire the company. He sought to terminate the deal last month, leading Twitter to sue in an attempt to make him complete the transaction.

Musk’s Manchester United tweets could attract fresh regulatory attention, since the club has traded on the NYSE since 2012.

“When someone in his position makes comments about buying an entity, people start speculating: ‘Is he joking, not joking, half-joking?’” said Hui Chen, an ethics and compliance consultant who served as the first compliance counsel expert at the US Department of Justice. “His actions have major impact on markets and he really needs to be cognizant about the potential implications.”

Trading volume in Manchester United shares and options spiked before Musk’s tweets. Open interest in call options increased to more than 60,000 contracts from around 20,000 contracts within just two trading days last week, with one call option showing 37,630 contracts changing hands on Aug. 12, according to data compiled by Bloomberg. 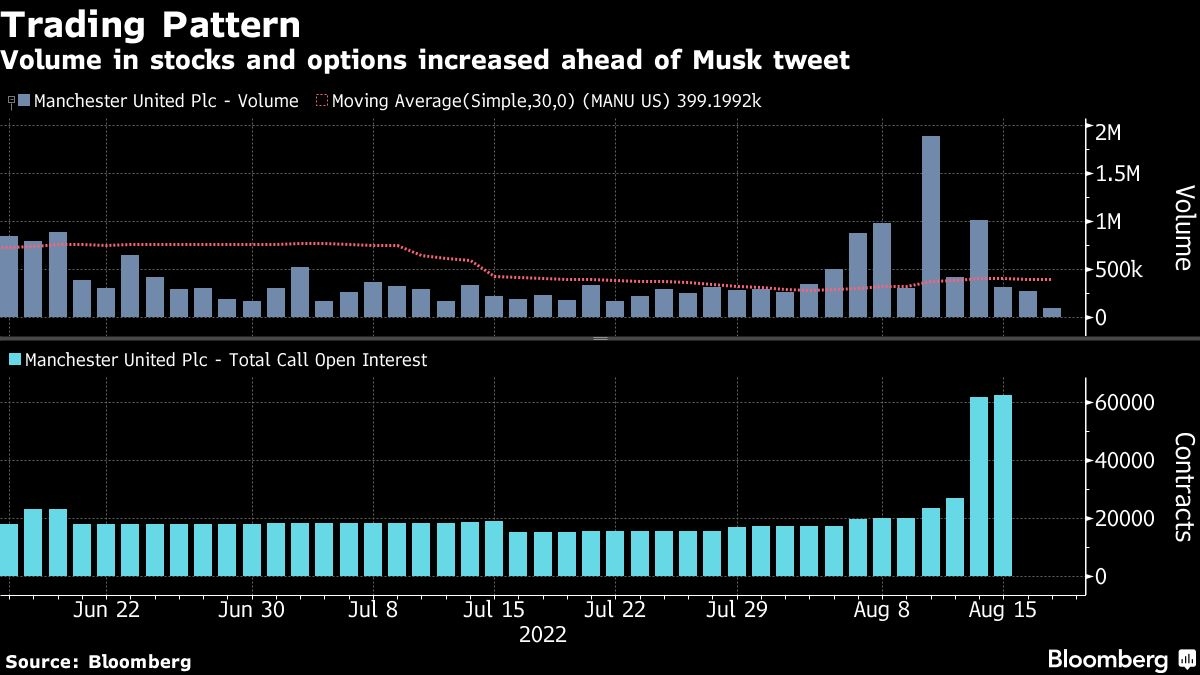 Manchester United is valued at US$4.6 billion, according to Forbes. In the most recent sale of a Premier League powerhouse, a group led by billionaire Todd Boehly agreed to buy Chelsea FC from sanctioned Russian oligarch Roman Abramovich for £4.25 billion (US$5.1 billion), including future investments.

Musk did tweet that if he were to buy any one team, it would be Manchester United because it was his favourite growing up. Andrew Ward, the club’s director of media relations and public affairs, declined to comment.

Although, if it were any team, it would be Man U. They were my fav team as a kid.

While Manchester United has won a record 13 Premier League titles, it currently ranks last on the table after a disastrous start to the season under new coach Erik ten Hag. The club lost its first two matches of the season, falling 4-0 to Brentford this past weekend.

Fans have protested the performance of the club under the ownership of the Glazer family, which also owns the NFL’s Tampa Bay Buccaneers. At the opening home match of the season -- a 2-1 loss to Brighton -- a large group of devotees walked toward the stadium with banners that read: “Fight greed. Fight for United. Fight Glazers” and “We want our club back,” the Telegraph newspaper reported.

🚨 Like and Retweet if u want the glazers out🔴 pic.twitter.com/Vk1yNidwUJ

Manchester United won its last Premier League title under legendary coach Alex Ferguson in the 2012-13 season, and has since fallen behind crosstown rival Manchester City, which has won four of the past five titles. Wantaway star striker Cristiano Ronaldo will be allowed to leave Manchester United this summer if he can find a club to buy him, the Telegraph reported Tuesday.