Musk offloads US$6.9B worth of stock in Tesla

Elon Musk offloaded US$6.9 billion worth of stock in Tesla Inc. to accumulate cash ahead of a trial that could force the billionaire to follow through on an agreement to acquire Twitter Inc.

Tesla’s chief executive officer sold about 7.92 million shares during the last three days of trading, according to regulatory filings. Musk, who still owns almost 15 per cent of the electric-car maker, tweeted that he was done selling and would buy Tesla shares if the Twitter deal doesn’t close.

“In the (hopefully unlikely) event that Twitter forces this deal to close *and* some equity partners don’t come through, it is important to avoid an emergency sale of Tesla stock,” Musk wrote.

In the (hopefully unlikely) event that Twitter forces this deal to close *and* some equity partners don’t come through, it is important to avoid an emergency sale of Tesla stock.

Musk has now dumped about US$32 billion worth of Tesla shares since November. The world’s richest person said less than four months ago he had no further stock sales planned and has attempted since then to terminate his US$44 billion acquisition of Twitter. The social media company has sued to force Musk to go through with the deal, and a trial is scheduled for October.

“He is cashing up for Twitter,” said Charu Chanana, a strategist at Saxo Capital Markets Pte in Singapore, who believes Musk may be trying to take advantage of Tesla shares rebounding about 35 per cent since late May. “The bear market rally has started to falter, and further repricing of Fed expectations could mean more pain for equities ahead, especially in tech.” 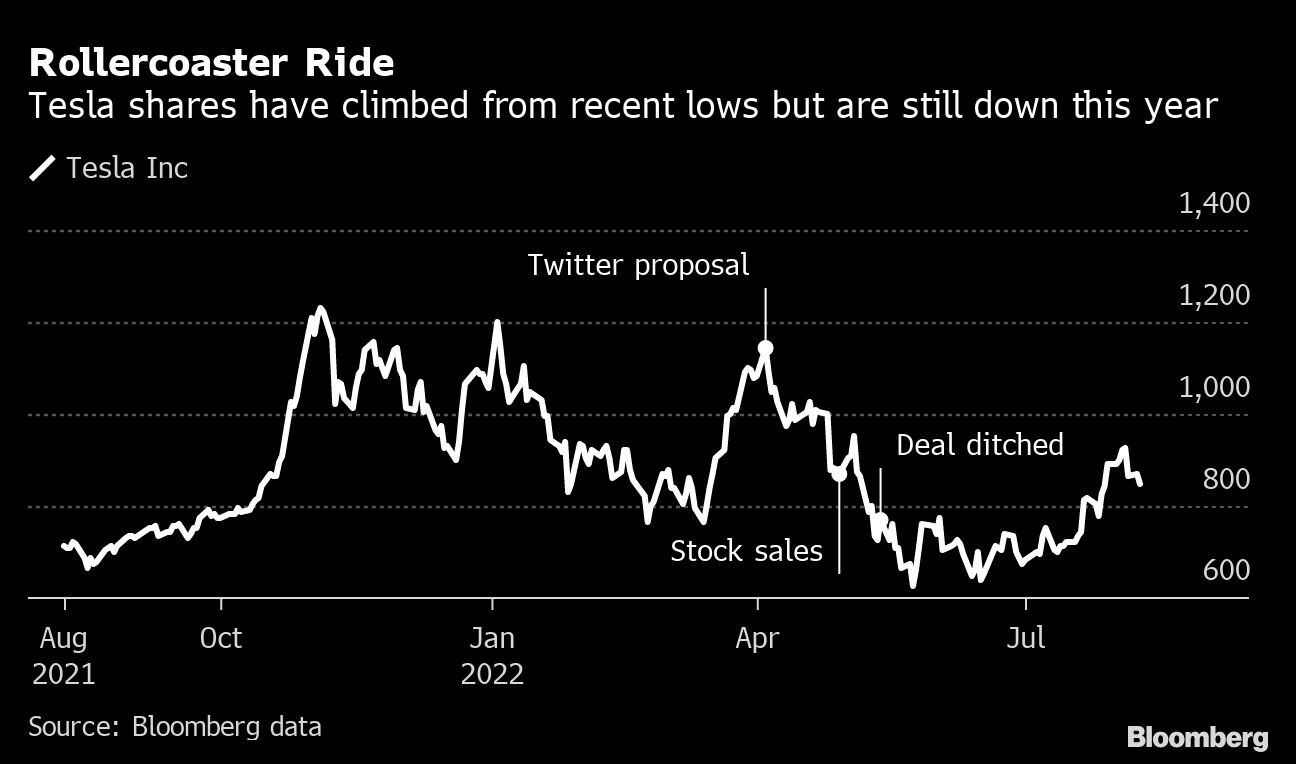 Investors had been skeptical that Musk, 51, was done offloading Tesla stock, with 68 per cent of 1,562 respondents to an MLIV Pulse survey saying last month he was likely to sell more regardless of what happens with the Twitter deal.

“Musk said at the Tesla shareholder meeting that any weakness in the share price was a buying opportunity, and then 24 hours later started selling stock himself,” said Jim Dixon, a senior equity sales trader at Mirabaud Securities. It’s “very unlikely” Musk is done offloading the stock, Dixon said.

Tesla’s market fortunes have been tied to the Twitter deal since Musk made his surprise overtures in April. The carmaker’s shares initially slumped out of concern the pursuit would distract him and the risk associated with the margin loan he intended to take out against his Tesla stake. The stock rallied when Musk abandoned the borrowing plan and in the weeks after he said he wanted to terminate the transaction.

When Musk dropped plans to partially fund the Twitter purchase with a Tesla margin loan, it increased the size of the equity component of the deal to US$33.5 billion. He’s previously announced having secured US$7.1 billion of equity commitments from investors including billionaire Larry Ellison, Sequoia Capital and Binance.

Over the weekend, Musk tweeted that if Twitter provided its method of sampling accounts to determine the number of bots on its platform, “the deal should proceed on original terms.”

Good summary of the problem.

If Twitter simply provides their method of sampling 100 accounts and how they’re confirmed to be real, the deal should proceed on original terms.

However, if it turns out that their SEC filings are materially false, then it should not.

The Twitter deal included a provision that if it fell apart, the party breaking the agreement would pay a termination fee of US$1 billion under certain circumstances. Legal experts have debated whether the conflict over spam bots is enough to allow Musk to walk away from the deal.

Musk’s disposals of Tesla stock started after he polled Twitter users on whether he should trim his stake. He remains by far the largest stakeholder, according to data compiled by Bloomberg.

Commenting before Musk’s tweets clarifying the reason for the sale, Gene Munster, managing partner of Loup Ventures, said he put the odds the billionaire will end up buying Twitter at 75 per cent.

“I’m shocked,” Munster said. “This is going to be a headwind for Tesla in the near term. In the long term, all that matters is deliveries and gross margin.”

Musk’s US$250.2 billion fortune is the world’s largest, according to the Bloomberg Billionaires Index, though his wealth has shrunk by about US$20.1 billion this year as Tesla’s stock has declined.

The carmaker’s shareholders approved a three-for-one stock split last week, a move designed to attract an even larger number of retail investors. Tesla’s better-than-expected second-quarter earnings have been a tailwind, along with landmark US legislation that includes tax credits for electric-car purchases and loans to companies constructing plants that make clean vehicles.

Musk tweeted separately that Tesla will start shipping its Semi truck later this year, followed by the Cybertruck in 2023. He’s said previously both would be in production next year, along with a new Roadster model.