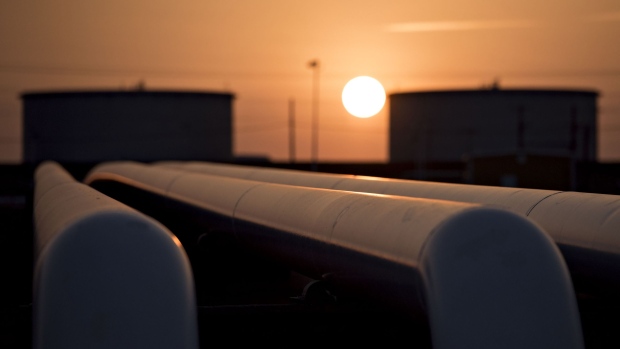 (Bloomberg) -- Pipeline giant Enbridge Inc. said it doubled the price advantage - known as greenium - it got by selling its first sustainability-linked bonds in Canadian dollars compared to a similar transaction in the U.S. market three months ago.

The firm sold C$1.1 billion ($864 million) of 12-year sustainability-linked bonds at 165 basis points over government securities, or around 10 basis points tighter than where the company’s comparable conventional bond would have been priced Friday, according to Vice President of Treasury Max Chan.

That compares to a sustainability-linked bond sale in June when the Calgary-based company issued $1 billion of similar duration notes, which priced five basis points tighter than where the company’s regular debt would have sold at that time, he said.

The greenium “was truly outstanding,” Chan said Friday. “Investors have been very, very hungry and eager to deploy capital here. So it’s sort of classic supply and demand dynamic.”

Sustainability-linked bonds generally penalize issuers with higher borrowing costs if they don’t meet certain environmental, social and governance metrics. If the borrower meets or exceeds targets, coupons remain unchanged. In contrast to green bonds, companies can use deal proceeds as part of their general funding plans. While sales of sustainability-linked bonds are picking up, they are still an relatively small portion of total ESG bond issuance.

With the Enbridge deal, SLB sales have reached $58 billion, according to data compiled by Bloomberg. That’s equivalent to less than 10% of sales of sustainable bonds worldwide.

Friday’s Enbridge deal got orders for around 3.4 times the deal amount from 82 investors, said Chan. The company also sold C$400 million of conventional bonds maturing in 30 years, which got an order book equivalent to more than twice the issue size after 44 investors took part in the transaction.

“We think that the asset class is permanent,” said Chan referring to SLBs. “It’s a tool that we would use on a reasonably regular basis, not every deal or every financing, but it’s something that we see ourselves use regularly.”

Separately, Enbridge got an order to pay $3.32 million for failing to follow environmental laws while doing work on its Line 3 pipeline replacement, according to a release on the Minnesota Department of Natural Resources website. Enbridge said it’s committed to a “corrective action” plan that’s being implemented and will work closely on resolution of this matter.