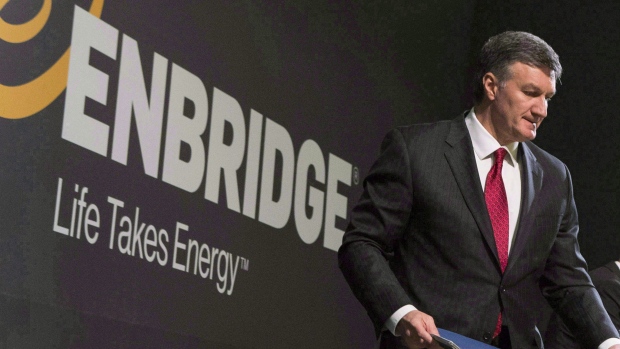 If all four pipelines get built the 2.1 billion barrel per day surge in capacity would fast outpace industry forecasts of Canadian crude production growth of 850,000 bpd by 2021.

"If you look at the supply profile and you look at our expansion replacement capacity for Line 3 and one other pipeline, that should suffice based on the current supply outlook, out to at least mid-next decade," Monaco said on a fourth quarter earnings call.

Monaco said Enbridge had another 400,000 bpd of potential capacity expansion opportunities in addition to Line 3 but the company would be guided by the amount of supply coming out of western Canada.

"We definitely need two of these pipelines by around 2025 and after that it depends on the supply outlook," Oberstoetter said. "There's not an evident need to get three or four pipelines built."

Monaco said there could be more to come given the push towards renewable energy in a number of European countries.

Earnings attributable to the company's shareholders were $365 million, or 39 Canadian cents per share, in the fourth quarter, hurt by charges, including for asset impairment and restructuring.