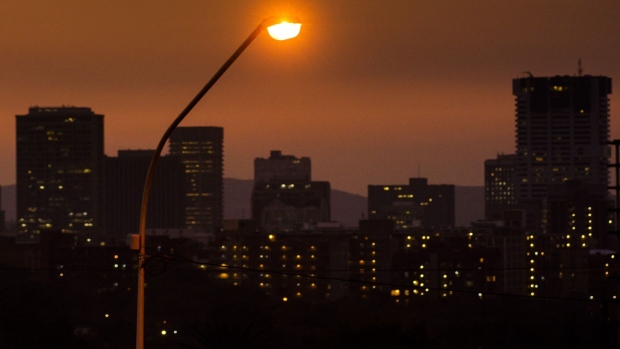 (Bloomberg) -- Rolling blackouts are costing South Africa’s economy as much as 899 million rand ($51 million) per day, according to estimates by the central bank.

Power cuts of about 6 to 12 hours a day, or so-called stage 3 and stage 6 outages, detract between 204 million rand and 899 million rand from the economy daily, the South African Reserve Bank said. Eskom Holdings SOC Ltd., which produces almost all the country’s electricity has imposed stage 6 cuts, the most severe yet, for 10 days so far this year, according to Bloomberg calculations.

South Africa is nearing 100 consecutive days of rolling blackouts, the longest stretch yet, with more to come as its electricity crisis deepens.

Eskom, the state-owned company that produces almost all the electricity in Africa’s most industrialized economy, has imposed blackouts daily since Oct. 31, making Monday the 99th straight day of outages, according to Bloomberg calculations. The so-called loadshedding is likely to continue for at least two more years as Eskom overhauls its electricity generating fleet.

South Africa’s Eskom will start a legal process to clear the way for an upgrade of power lines and increased service to the northern Limpopo province, according to a statement by the Department of Public Works and Infrastructure.

Property owners where the lines will run have been informed through notices of expropriation, the department said. The utility is increasing transmission capacity as it struggles to meet demand for electricity.

South Africa is also in talks with the US about renewing a nuclear-cooperation agreement that lapsed in December and resulted in the suspension of a license for supplies of the fuel to the Koeberg power plant, the energy department said in a separate statement.

The Purchasing Managers’ Index compiled by S&P Global, which measures the performance of South Africa’s private sector economy, fell to 48.7 from 50.2 in December, signaling contraction.

Eskom will reduce the intensity of rolling power cuts starting Friday, the state-owned utility said in a Twitter post.

Eskom will eliminate the position of chief operating officer after Jan Oberholzer, who is currently in the role, retires in April, according to board member Mteto Nyati.

The process to find a new chief executive officer to replace Andre de Ruyter, who steps down at the end of March, is underway. The company helping with the search will present a long list of candidates in the next two weeks, Nyati said in an online briefing.

The Utility Ruining South Africa Is a Big Winner for Bondholders (Feb. 2, 4:17 p.m.)

Eskom is not very good at keeping the lights on, but it’s providing excellent profits for bondholders.

The utility’s dollar bonds due 2028 — which don’t have an explicit government guarantee — have handed investors a total return of 10% this year, more than three times that of the emerging-market benchmark. Securities due in 2025 and 2027 are also among the best performers in the 2,100-member Bloomberg Emerging Markets Hard Currency Aggregate Index.

A coal-dominated power system will put a third of South Africa’s trade at risk by 2030, and 56% of trade by 2050 because of carbon tariffs, Eskom’s Chief Executive Officer Andre de Ruyter told a coal conference in Cape Town.

Seriti Resources, a South African coal producer, said it has a long-term agreement to source power from a wind farm that will be built by its green energy unit.

--With assistance from Paul Burkhardt, Robert Brand and Colleen Goko.