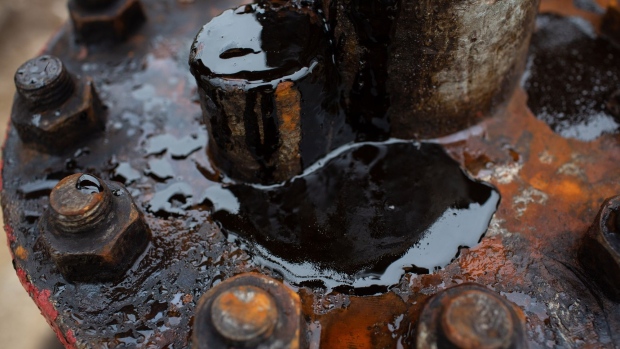 Thick black oil sits on the pipe work fitting of an oil pumping jack, also known as "nodding donkey" in an oilfield near Almetyevsk, Russia, on Sunday, Aug. 16, 2020. Oil fell below $42 a barrel in New York at the start of a week that will see OPEC+ gather to assess its supply deal as countries struggle to contain the virus that’s hurt economies and fuel demand globally. Photographer: Andrey Rudakov/Bloomberg , Bloomberg

(Bloomberg) -- The European Union is closing in on a deal to cap the price of Russian crude oil at $60 a barrel, their latest attempt to clinch an agreement before a Monday deadline, according to people familiar with the matter.

But Poland continues to push to harden the sanctions package before signing off on the price cap, and talks will continue tomorrow, the people said. Warsaw wants new sanctions linked to the cap plan.

EU talks have been dragging on since last week as Poland and the Baltic nations demanded measures that put more pressure on Moscow’s revenues. Even after their efforts, the cap that looks set to be agreed is above the prices most Russian crude already trades at.

As a deal looks within reach, the bloc is set to create a mechanism that would allow for revisions of the price every two months, according to a draft document. There’s also a plan to make sure any resetting of the cap should leave it at least 5% below average market rates.

One official from a coalition country said late on Thursday that each review of the cap price will take into consideration a variety of factors, including changes to market prices, as well as fiscal and economic conditions inside Russia.

The person added that they were encouraged that the price cap project had come this far. At its outset, the person said, the plan was judged to have little chance of success. They said the approach of the cap’s imposition had already forced Russia to discount its prices on crude sales more than the coalition had anticipated might happen.

It’s still not clear how the Kremlin will react to the $60 cap, but Foreign Minister Sergei Lavrov indicated on Thursday that he thought the price cap level was irrelevant. Given the cap is above market rates, Moscow may be able to claim it can just keep selling oil as usual.

The intention of the price cap -- first proposed by the US amid concern EU sanctions were too strict -- is to keep Russian oil flowing to avoid a global price surge, while also limiting Moscow’s revenue. For the price cap plan to accomplish its goal, the level has to be attractive enough to the Kremlin.

The risk for oil markets is that if the cap is seen as too low, Moscow may make good on a threat to shut down production -- sending global crude prices higher.

The country’s flagship Urals grade traded as low as $45.31 a barrel this week at the Baltic Sea port of Primorsk, according to data from Argus Media, a publisher of commodity benchmarks. It rose to $48.04 on Wednesday.

Deputy US Treasury Secretary Wally Adeyemo signaled on Thursday that $60 would be acceptable to Washington, saying it was “in the range” Group of Seven countries have discussed.

Poland and the Baltic countries have in parallel asked for firmer progress on a new package of EU sanctions. Clarity on those measures is expected over the next few days and the EU’s executive arm this week also presented proposals to tackle the circumvention of sanctions, use frozen assets and hold Russia accountable for its war of aggression against Ukraine.

A ‘Price Cap’ on Russian Oil -- Can That Work?: QuickTake

Greece and other shipping nations had pushed for a higher price, to keep Russian oil trading. They had separately been seeking guarantees that the shipping industry won’t be discriminated against by international competitors as a result of the cap.

G-7 countries are aiming to put the price cap in place before Monday, when wider EU sanctions on oil are due to come into force. The cap plan would ban shipping and services needed to transport Russian oil, such as brokering, financial assistance and insurance, unless the cargoes are purchased below the cap.

--With assistance from Christopher Condon, Saleha Mohsin and Josh Wingrove.

(Updates with details of price-review process, in fifth paragraph)