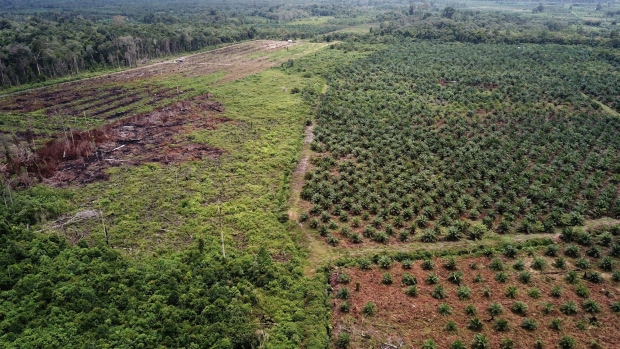 (Bloomberg) -- The European Union sealed a late-night deal to curb its role in global deforestation through its supply chains for key commodities.

Parliament and member states agreed to set mandatory rules for companies selling palm oil, beef, timber, coffee, cocoa, rubber and soy to ensure that those products do not come from deforested land. Some manufactured products, like chocolate, furniture and printed paper will also be included.

Environmental groups applauded the agreement, heralding the rules as a world first, with the World Wildlife Fund calling it “groundbreaking.” Europe’s heavy demand for rubber, for example, has been linked to deforestation of 520 square kilometers in West Africa since the start of the millennium.

“Make no mistake, this law will make some chainsaws fall silent and stop companies profiting from deforestation,” said John Hyland, a spokesperson for Greenpeace. “In the coming years, the EU must broaden its focus to protect nature as a whole, not just forests.”

Some industry groups were less happy.

Producers of palm oil have warned that the EU’s move could isolate and cut off market access from millions of small farmers across Southeast Asia, Latin America and Africa who do not have the means to meet the stricter traceability requirements. Europe as a bloc is the biggest palm oil importer after India, with the tropical oil used in many consumer products such as margarine, ice cream, lipstick, as well as biofuel.

The Roundtable on Sustainable Palm Oil, an industry group that promotes standards for “certified sustainable” products, said last week that tougher restrictions on palm oil in the EU could have unintended consequences for vulnerable farmers worldwide, and disproportionately impact growers that can afford it the least. Indonesia is the world’s biggest palm-oil grower, followed by Malaysia and Thailand.