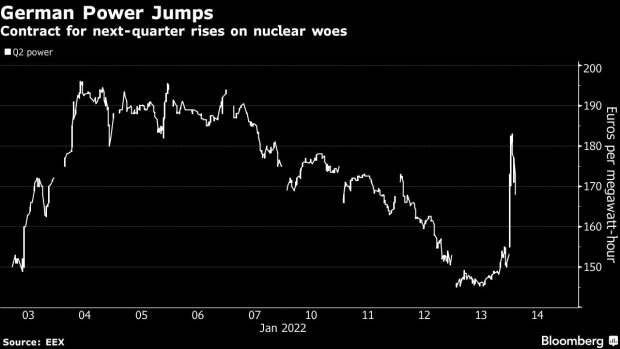 (Bloomberg) -- French and German electricity prices jumped after Electricite de France SA revised down the production forecast for its nuclear fleet that’s vital to keep the lights on in Europe.

The world’s biggest producer of nuclear power reduced its estimate by about 8% after finding defects at some reactors. It’s another blow to Europe which is already facing an historic energy crisis with natural gas stocks at their lowest in more than a decade for this time of year.

“There is uncertainty in establishing the impact with very volatile prices recently,” said Mieke Becker, analyst at Bernstein Autonomous LLP. “As reactor inspections are ongoing, including a control program for the entire fleet, is there a risk of even more or longer outages?”

Fresh extension of outages at several reactors means that at least nine reactors will be offline at the start of April, cutting almost a fifth of the total output, according to data from grid manager RTE. As recently as Tuesday, Ecology Minister Barbara Pompili said the country has “too many” nuclear reactors offline, as the government was trying to gain control of the crisis.

During routine once-a-decade maintenance at its Civaux and Penly reactors, the company found defaults near welds on pipes of the safety injection system circuits, it said in a statement Thursday. The start of Penly-1 was delayed by more than two months to May 30. Civaux-2’s resumption was postponed by nine months to the end of this year.