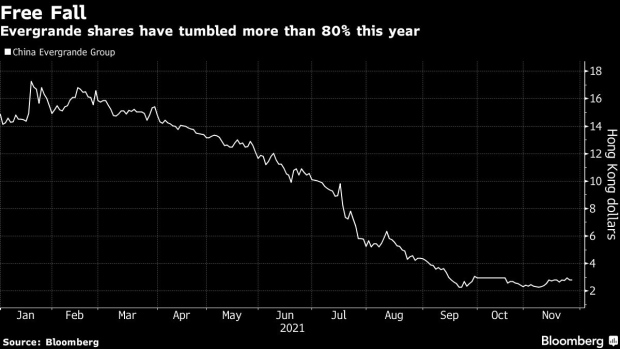 (Bloomberg) -- A flurry of large trades in China Evergrande Group Thursday suggested a large institutional holder agreed to a 20% discount to offload the stock.

Seven block trades -- totaling 300 million shares -- crossed before the open of regular cash trading in Hong Kong. The orders were all priced at HK$2.23 apiece, indicating they were part of the same block agreement. That compares with Wednesday’s closing price of HK$2.78.

Trading in Evergrande and related companies has been particularly active this week for no obvious reason, spurring speculation that founder Hui Ka Yan may tap the stock market for funds. The sale may have come from the 2.8 billion share pool that appeared in Hong Kong’s clearing system last week, widely thought to belong to Hui or his wife. It could also come from long-time backer Chinese Estates Holdings Ltd., which held 313.2 million shares after selling down its stake in recent weeks.

Hong Kong newspaper Ming Pao earlier reported an unidentified shareholder was planning to sell the shares, without saying where it got the information. Evergrande was up 1.1% at 11:02 a.m. in Hong Kong.

Evergrande and Chinese Estates didn’t immediately respond to a Bloomberg request for comment on Thursday. Block trades are agreements between two parties to exchange large amounts of securities at a predetermined price. They are often broken up into smaller orders to facilitate execution.