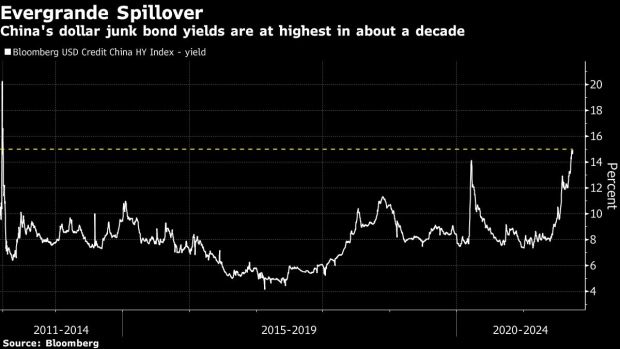 (Bloomberg) -- China Evergrande Group is facing another bond interest payment after giving no sign that it had paid a separate one last week, as its deepening debt crisis looms over global markets.

The world’s most indebted developer needs to pay a $45.2 million coupon on Wednesday for a dollar bond that matures 2024, Bloomberg-compiled data show. The payment has a 30-day grace period before default could be declared, according to the note’s offering memorandum.

Some holders also maintain Evergrande is a guarantor of a dollar bond that matures Sunday, Bloomberg reported Tuesday. They’re forming a committee to press their claims in the event of a default, according to people familiar with the plans. Separately, Evergrande has made no public statements on an $83.5 million coupon that was due Sept. 23 and at least several holders had said they hadn’t received payment.

Investors are scrutinizing Evergrande’s imminent debt obligations as regulators urge the real estate developer to avoid a near-term default and communicate with bondholders. The firm has already fallen behind on its payments to banks, suppliers and holders of onshore investment products.

The group’s onshore property unit said previously it had negotiated a resolution of an interest payment on a yuan bond due Sept. 23, without giving details. Still, Evergrande has one more onshore and three offshore coupons due in October.

Contagion risk concerns about Evergrande, Asia’s biggest issuer of junk bonds, are weighing on China’s offshore credit market as investors consider the spillover effects of a possible restructure. That’s spurred yields on the nation’s junk dollar bonds to about 15%, the highest in about a decade, according to a Bloomberg index.