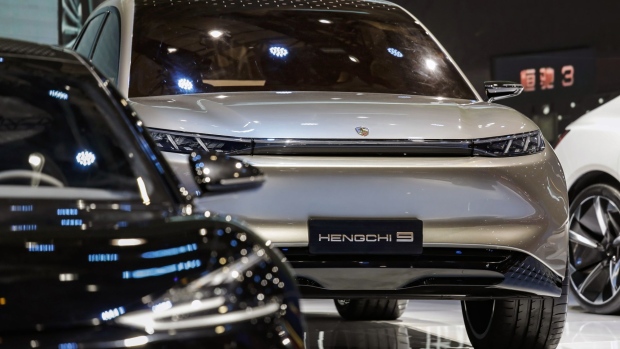 China Evergrande New Energy Vehicle Group Ltd.'s Hengchi 9 electric vehicle at the Auto Shanghai 2021 show in Shanghai, China, on Monday, April 2021. Evergrande NEV is a stock-market darling, with its shares rallying more than 1,000% over the past 12 months, giving it a market value greater than Ford Motor Co. and General Motors Co. , Bloomberg

(Bloomberg) -- China Evergrande Group’s electric-car unit has missed salary payments to some of its employees and has fallen behind on paying a number of suppliers for factory equipment, according to people familiar with the matter, evidence the stricken property developer’s debt woes are having an impact beyond its core business.

The cash flow difficulties mean China Evergrande New Energy Vehicle Group Ltd. will likely miss its target to start mass deliveries next year considering trial production of electric vehicles at its factories in Shanghai and Guangzhou has been dialed back, the people said, asking not to be identified as they’re not authorized to speak publicly.

Most employees at Evergrande NEV are paid at the start of every month and again on the 20th, however for some mid-level managers, the second installment for September hasn’t arrived, the people said. Several equipment suppliers, meanwhile, began withdrawing their on-site personnel from the Shanghai and Guangzhou sites as early as July after payments for machinery in Evergrande NEV’s factories weren’t made.

Those people were on hand to provide the timely adjustment of production equipment and fix any issues, the people said. Now that they’re not around, Evergrande NEV has been forced to rely on its own employees, who aren’t as familiar with the equipment, resulting in just a small handful of trial cars being made daily.

The financial stress of Evergrande’s parent has reached epic proportions in recent weeks, prompting some to describe the potential contagion as China’s Lehman moment considering risks associated with Evergrande are threatening to freeze global credit markets. The giant real estate developer, whose assets also span banks and media businesses, is $300 billion in debt and widely expected to default on bond payments. Whether Beijing will engineer a resolution rather than allowing a chaotic collapse into bankruptcy is something investors around the world are now watching.

Read more: Why Is Everyone Talking About Evergrande?

Evergrande NEV flagged during its half-year earnings results last month that it might have to delay car production unless it can secure more capital in the short term. The company reported a 4.8 billion yuan ($744 million) loss for the six months to June 30.

The startup, which vowed in March 2019 to take on Elon Musk and become the world’s biggest maker of EVs within five years, has unveiled nine models under its Hengchi brand but has yet to mass produce a single car. It made a great splash at this year’s Shanghai auto show, with all nine protoypes on display and promises of 5 million cars a year by 2035.

However four models, the Hengchi No. 1, 3, 5, and 6, are still at what’s known as the Engineering Trial (ET) phase, a preliminary stage that calibrates a car’s standards and quality controls while it has an all-white body, the people said. It typically takes at least six months after completion of the ET phase to mass production.

Like investors in China Evergrande Group, shareholders of Evergrande NEV have quickly become disillusioned. The Hong Kong-listed stock is down 90% this year, a huge pullback considering the company used to have a market value greater than Ford Motor Co. and General Motors Co.

Officially created when Evergrande Health changed its name to Evergrande NEV in July last year, while the company bills itself as a carmaker, most of the money it does bring in still comes from community health services and aged-care facilities.

The EV unit is a small part of Evergrande’s sprawling empire, which includes financial services and a bank, but which is primarily reliant on residential apartment sales.