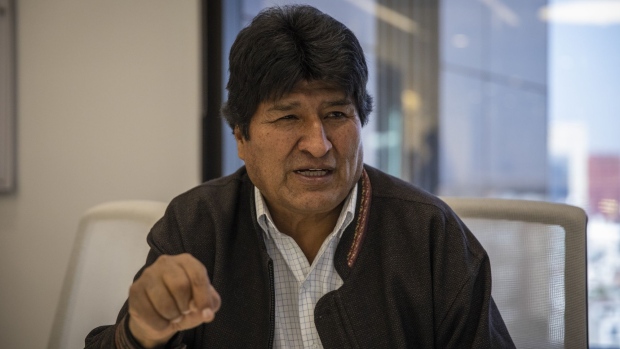 Evo Morales, Bolivia's former president, speaks during an interview in Mexico City, Mexico, on Monday, Nov. 18, 2019. A few weeks ago, Evo Morales, the longstanding president of Bolivia, seemed headed for reelection. Today, he and his top aides are in exile in Mexico while some in his country have taken to the streets again to protest what they say was the military coup that removed him. Photographer Alejandro Cegarra/Bloomberg , Bloomberg

(Bloomberg) -- A 32-year-old senator from Bolivia’s majority socialist party should be the nation’s president, ousted leader Evo Morales said in an interview.

Monica Eva Copa, from Morales’s MAS party, was elected leader by the Senate last week. Morales says that makes her the legal head of state, rather than Jeanine Anez, whose claim to be interim president has been recognized by the U.S. and Brazil. Anez and her backers have begun an aggressive remaking of the nation’s foreign policy to align it with the programs of conservative leaders such as Brazil’s Jair Bolsonaro and Chile’s Sebastian Pinera.

Anez “has no constitutional right” to occupy the office, Morales told Bloomberg News in Mexico City on Monday. “The people don’t recognize her, and that’s why there are so many demonstrations.”

Bolivia has been in violent turmoil since Morales’s opponents accused him of trying to rig the Oct. 20 presidential vote. He quit Nov. 10 along with his vice president and the heads of congress, saying he’s the victim of a “right-wing coup.”

Coup or No Coup, Bolivia’s Morales Fell From Grace: QuickTake

At least 20 people have died in clashes since he left as security forces put down protests against Anez’s government. Other countries in the region, from Chile to Ecuador have been roiled by violent unrest in recent weeks, amid austerity programs and weak economic growth.

Anez and her allies should be investigated for the deaths of protesters, which amount to “genocide” Morales said.

After Morales fled to Mexico, Anez declared herself Senate leader in a session of congress boycotted by Morales’s allies, who have a majority in both houses. Both Anez and Monica Eva Copa claim to be the Senate leader who, under the constitution, would become president when the regular president and vice president are absent.

Since taking power, Anez has implemented policies radically different from Morales’s, including cutting the nation’s alliances with Venezuela and Cuba. She’s pledged to hold new elections as soon as possible.

Morales won a fourth term in the Oct. 20 presidential election, but the Organization of American States said the vote was unreliable and plagued by irregularities. He stepped down after three weeks of protests after he lost the backing of the security forces.

To contact the reporter on this story: Nacha Cattan in Mexico City at ncattan@bloomberg.net