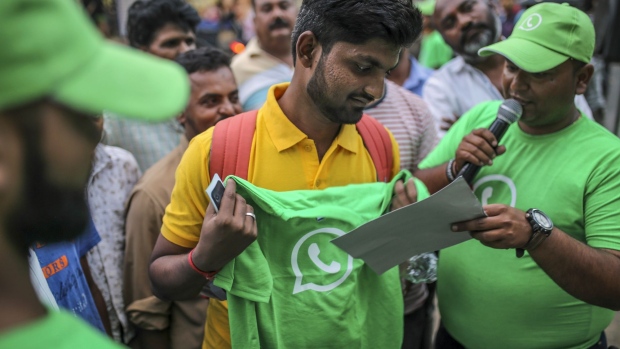 Facebook Inc.’s US$5.7 billion investment in a unit of India’s Reliance Industries Ltd. creates an e-commerce leviathan to take on Amazon.com Inc. and Walmart Inc. in one of the world’s most competitive internet arenas.

The deal twins WhatsApp with Reliance’s nearly 400 million internet users -- much of that added in just a couple of years -- and nationwide store and logistics network.

The pair could start with forays into e-commerce and digital payments, before moving on to segments from online education to virtual health over the longer term, helping transform the industry that’s now mainly the preserve of India’s urban elite.

Facebook’s biggest investment since its takeover of WhatsApp could empower a new combatant in an e-commerce war already raging between Amazon and Walmart’s Flipkart.

On Wednesday, Facebook founder Mark Zuckerberg and Reliance Chairman Mukesh Ambani singled out the retail sphere as an area ripe for collaboration. While they were vague on details, Whatsapp and Reliance’s JioMart could start by delivering products through kiranas, the mom-and-pop stores that dominate commerce across the nation, they said.

“We’re also committing to work together on some critical projects that we think are going to open up a lot of opportunities for commerce in India,” Zuckerberg said in a video posted on his social media platform. “With a lot of communities around the world in lockdown, it’s even more important now than ever that people have the tools to connect with each other and that businesses can find ways to operate online.”

That will prompt more and more Indians to shop over the internet. Currently, about 140 million buy products online at least once in 12 months, according to Forrester Research.

Amazon, that has invested more than US$6.5 billion in India, and Walmart, which acquired Flipkart in a US$16 billion deal two years ago, are betting the switch to e-commerce will accelerate, and are using local kiranas to extend their reach into rural India.

Amazon’s founder Jeff Bezos, during a trip to India in January, said his company plans to invest US$1 billion to help digitize small and medium businesses including kiranas. The company has also invested in offline assets, buying stakes in retailers such as Shoppers Stop Ltd. and Future Group.

Indians can order goods and get faster shipments from local stores, and those stores can in turn grow their business, Ambani, who regained his position as Asia’s richest person following the deal, said in a separate video.

“In the very near future, JioMart, Jio’s digital new commerce platform, and WhatsApp will empower nearly 3 crore (30 million) small Indian kirana shops to digitally transact with every customer in their neighborhood,” he said.

India’s US$800 billion retail market is dominated by groceries and everyday essentials, which account for about US$500 billion in annual sales. The market could grow at least 10 per cent annually to US$1.3 trillion by 2025.

Most Indians buy their daily supplies through kiranas: tiny mom & pop stores stacked with every imaginable knick-knack from shaving razors to onions and instant noodles. Organized retail such as supermarket chains command a minuscule share of the market because kiranas enjoy the trust and loyalty of local communities.

“Reliance has mammoth retail infrastructure, including a chain of 11,000 stores, wholesale relationships, warehousing and a vast portfolio of private labels while Facebook’s WhatsApp will be the platform where users could ease into online retail and even make digital payments.”

But testing grocery retail is only the first step. WhatsApp is now preparing to roll out a nationwide payments network, entering a market estimated to expand to US$1 trillion by 2023, according to Credit Suisse Group AG.

“If the Jio deal works, Facebook can take it to other markets and compete with Amazon and Walmart in global e-commerce,” said Satish Meena, a senior analyst with Forrester Research

The combination should get off the ground quickly as both kirana owners and their users already have WhatsApp installed on phones, Meena said.

In his video, Ambani hinted at the vast future scope of the collaboration.

“In the days to come, this winning recipe will be extended to serve other key segments like kisans (farmers), small and medium enterprises, students & teachers, healthcare providers, women and youth,” he said. WhatsApp has seeped into the daily vocabulary of Indians and become a friend to everybody, he said. “Together, we will accelerate India’s digital economy.”