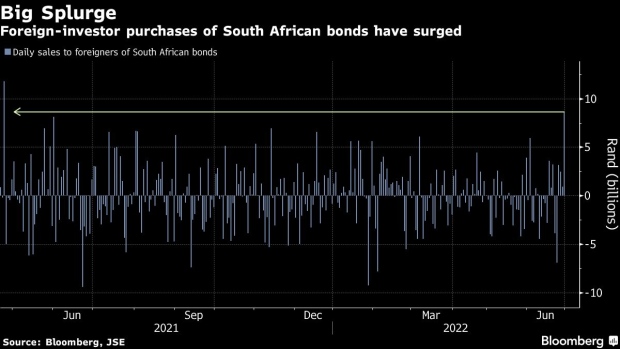 Commercial buildings on the city skyline at dusk in central Cape Town, South Africa, on Thursday, April 21, 2022. South Africa’s state power utility Eskom Holdings SOC Ltd. warned the country may have more than 100 days of electricity blackouts this year because of outages at its power plants. Photographer: Dwayne Senior/Bloomberg , Bloomberg

(Bloomberg) -- Foreign investors piled back into South African bonds this week, enticed by what one trader described as “fantastic” value as yields climbed to the highest levels in more than two years.

Non-residents bought a net 8.7 billion rand ($533 million) of government debt on Thursday, the most in a year, based on settled trades data reported by stock exchange operator JSE Ltd. That helped to turn around the selling trend for June, with the final tally showing net inflows of 10.1 billion rand for the month.

South Africa’s 10-year rand bond yield has climbed 70 basis points in the past month to trade above 11% for the first time since April 2020 amid worries about the effect of rolling power blackouts on economic growth, and policy tightening in developed economies. That’s despite the central bank’s assurance that it’s prepared to hike rates aggressively to bring inflation back within the target range.

“The ultra-long end of the curve is offering fantastic value at over 11.50%, especially if we believe the South African reserve Bank that CPI will be under control in the long term,” Deon Kohlmeyer, a fixed-income trader at Johannesburg-based Rand Merchant Bank, said in a client note.

The country’s bonds are among the biggest laggards in emerging markets in terms of total returns in dollars, following the rand’s 4% slump in June. The bonds posted losses of 7.8% last month, compared with the average decline of 2.6% in a Bloomberg gauge of developing-nation bonds.