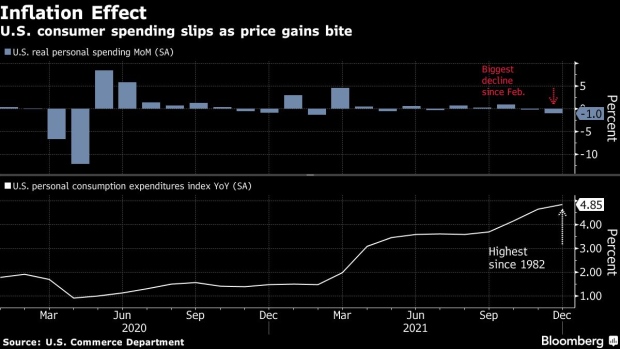 Raphael Bostic, president and chief executive officer of the Federal Reserve Bank of Atlanta, speaks to members of the Harvard Business School Club of Atlanta at the Buckhead Club in Atlanta, Georgia, U.S., on Wednesday, Feb. 19, 2020. Bostic said he's not seeing risk levels rising to a point that they would be a "source of concern." Photographer: Elijah Nouvelage/Bloomberg , Bloomberg

(Bloomberg) -- The Federal Reserve could opt to raise its benchmark rate by 50 basis points if a more aggressive approach to taming inflation is needed, Raphael Bostic, president of the Fed’s Atlanta branch, told the Financial Times in an interview.

“Every option is on the table for every meeting,” Bostic said on Friday. “If the data say that things have evolved in a way that a 50-basis-point move is required or be appropriate, then I’m going to lean into that . . . If moving in successive meetings makes sense, I’ll be comfortable with that,” he told the newspaper.

Bostic said he would be looking for whether higher wages are meaningfully boosting prices, though he expects wage growth to moderate in the coming months, according to the FT.

Fed Chairman Jerome Powell told reporters last week that officials were ready to raise rates in March, and he left the door open to moving at every meeting if needed to curb the fastest U.S. inflation in a generation.

The vast majority of economists forecast the Fed will make a quarter-point move in March, though Nomura Holdings Inc. expects a 50 basis-point increase, citing Powell’s comments at a press conference. A 50-point move would be the first since 2000.