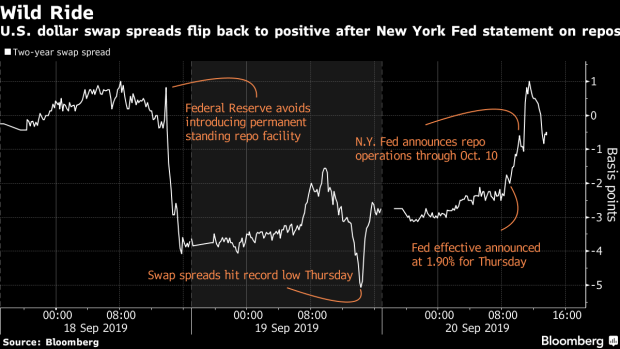 (Bloomberg) -- The Treasury’s next round of auctions starting Monday is set to serve as the first test of whether the Federal Reserve’s steps to tackle the funding crunch have been sufficient.

After a tumultuous few days in which funding costs spiked to record levels, calm returned to this vital corner of the financial markets following the New York Fed’s announcement Friday of a series of overnight and term operations for the next three weeks.

“The Fed just reminded the market that they have complete control over the front-end if and when they want it,” said BMO Capital Markets strategist Jon Hill. “Given the volatility we saw this week, they want to ensure quarter-end goes as smoothly as possible.”

But before quarter-end, the market will have to absorb more than $200 billion of bill and note auctions this week, starting with Monday’s three- and six-month debt. Amid volatility in the repo market, bill auctions met a poor reception Thursday, a sign of investors’ skepticism that the Fed’s action to that point would prove effective.

On Friday, the New York Fed said it will conduct overnight repurchase agreement operations daily until Oct. 10. This Monday’s operation will be for as much as $75 billion, while the actions thereafter will be for at least that amount. Separately, it will also conduct three 14-day term operations for an aggregate amount of at least $30 billion on Sept. 24, Sept. 26 and Sept. 27, according to a statement.

There were immediate signs of easing concerns. Swap spreads widened, showing that worries over dealers’ financing costs were ebbing.

“This is a more concerted effort to ensure confidence in the market that the Fed will do what is necessary to quell serious volatility in the repo market and consequently the policy rate,” said Jonathan Cohn, strategist at Credit Suisse. “The market reaction shows it has had a significant positive reaction, with the sharp widening of the two-year swap spread.”

The announcement of the operations going forward followed the New York Fed’s four straight days of overnight liquidity injections as it sought to ease the funding stress that had rippled through markets in previous days.

Surges in the repo rate normally occur only at quarter-end and sometimes month-end. This mid-month jump was attributed to a confluence of events that knocked cash reserves in the banking system out of balance with the volume of securities on dealer balance sheets: a corporate tax payment date, settlement of last week’s Treasury auctions, and last week’s bond-market sell-off, in which investors sold securities back to dealers.

The New York Fed injected $75 billion Friday through an overnight repo operation. That followed actions of the same size on Wednesday and Thursday, and $53.2 billion on Tuesday, with each of these prior agreements rolling off the morning after they’re completed.

The latest addition of liquidity follows the Federal Open Market Committee’s move Wednesday to reduce the interest rate on excess reserves, or IOER, by more than their main interest rate -- all attempts to quell money-market stresses.

The Fed effective on Thursday was 1.9% -- within the central bank’s target rate range of 1.75% to 2%. That compares to 2.25% on Wednesday, and 2.3% Tuesday -- when it busted above the top of the Fed’s previous target band, before policy makers lowered borrowing costs on Wednesday.

What to Watch Next Week

--With assistance from Edward Bolingbroke and Emily Barrett.

To contact the editors responsible for this story: Benjamin Purvis at bpurvis@bloomberg.net, Debarati Roy, Mark Tannenbaum