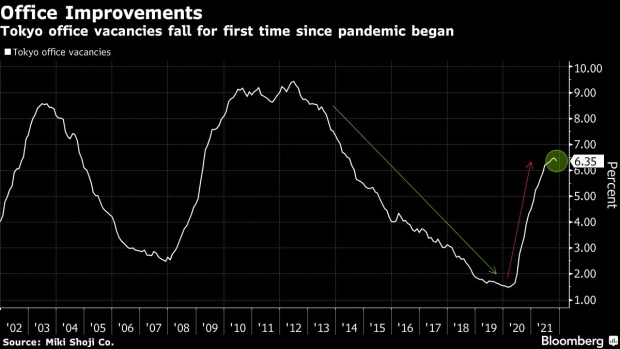 Evening commuters in the Shinjuku district of Tokyo, Japan, on Thursday, July 29, 2021. While the number of infections directly connected with the Olympics has so far been relatively low, Tokyo and its surrounding areas are experiencing their worst-yet virus wave. Photographer: Noriko Hayashi/Bloomberg , Bloomberg

(Bloomberg) -- The rate of offices standing empty in central Tokyo in November dropped for the first time since the pandemic began, an early signal that the worst could be over for the capital’s property market.

Vacancies fell by 0.12 percentage points to 6.35% in Tokyo’s five main business districts, real estate brokerage Miki Shoji Co. said on Thursday. Since hitting 1.49% in February 2020, the lowest since the country’s economic bubble burst in the early 1990s, vacancies have surged. The pandemic and an uncertainty over the future of the conventional work environment led tenants to cancel existing leases or postpone signing new ones.

After the most recent virus state of emergency was lifted at the end of September, Japan has seen a recovery in activity, with Covid cases and deaths among the lowest in the world. However, it remains to be seen if November’s data is the start of a new trend or a blip, with Miki Shoji pointing to the lack of major new buildings being opened in November among the reasons for the decline.

The vacancy rate tends to broadly move with the state of the economy. Having recovered during the early 2000s following the dot-com bubble, the rate soared to a record 9.43% in 2012 following the global financial crisis, and stayed above 8% until the impact of then Prime Minister Shinzo Abe’s Abenomics program triggered a years-long decline.

The pandemic coincided in 2020 with the opening of several major buildings intended to open alongside the Tokyo Olympics before they were postponed. Multiple large developed are also scheduled to open in 2022, including the nearly 300,000 square meter Tokyo Midtown Yaesu being built near Tokyo station by Mitsui Fudosan Co.

“The market is skeptical about whether the vacancy rate will continue to drop in the future, due to economic uncertainty and firms reviewing how they use their offices,” Mitsubishi UFJ Morgan Stanley analyst Toshiyuki Anegawa wrote in a note on Wednesday. “While the improvement might support real estate stocks, it’s not quite enough to be a catalyst for them to rise.”

Real estate stocks have been choppy this week, with index events, Chinese property movements and news on mortgage tax breaks posited among the reasons for a sudden drop on Wednesday. The Topix Real Estate Index dipped 0.4% on Thursday.