Canadian retail sales returned to their sluggish ways in December, ending the year with no growth and leaving the sector with one of its worst annual performance ever.

Sales were little changed in December from a month earlier, in both nominal and volume terms, dragged down by lower car sales, Statistics Canada said Friday in Ottawa. Economists had predicted a 0.1-per-cent gain. Excluding autos, sales were up a better-than-expected 0.5 per cent.

Receipts seesawed in the previous two months, from a one-per-cent decline in October to a revised 1.1-per-cent gain in November. The net result, however, was a 0.2-per-cent drop in revenue in the fourth quarter. Sales fell in the three-month period despite higher prices, with volumes down 0.5 per cent on the quarter.

For all of 2019, sales were up 1.6 per cent. That’s the slowest pace of growth since the 2009 recession and the most sluggish increase in receipts outside of recession since at least 1992. 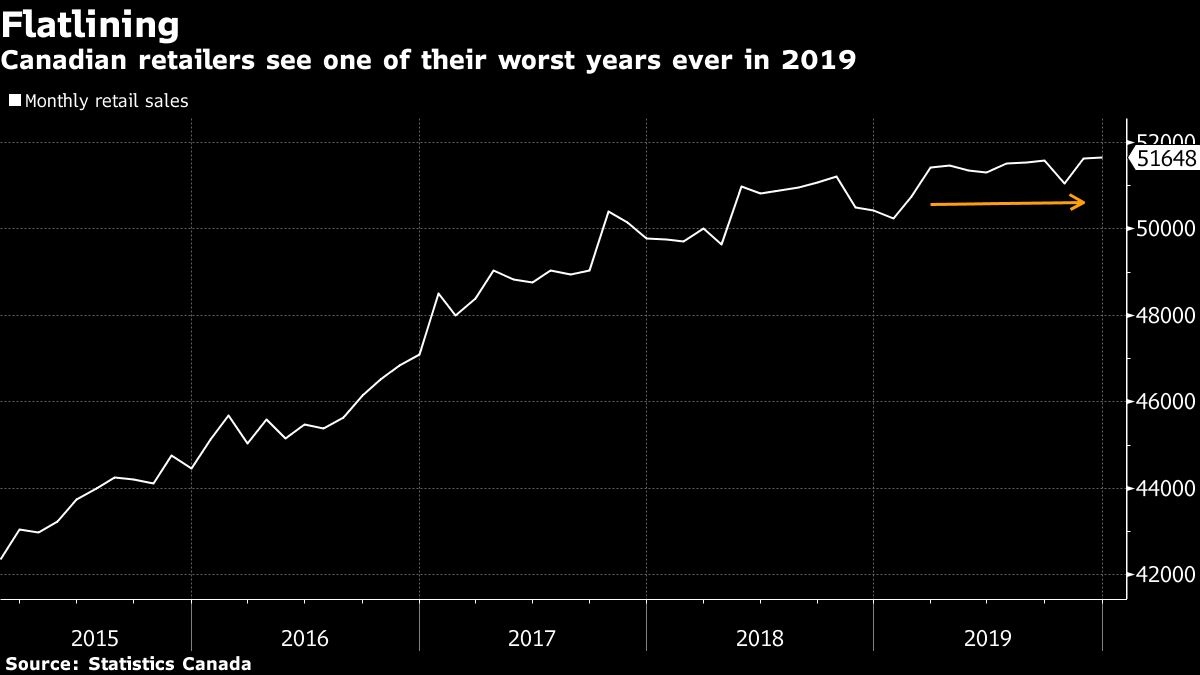 • Lacklustre consumer spending is one of the main reasons the Bank of Canada has changed its messaging in recent weeks, with warnings that a sharp economic slowdown in the fourth quarter may persist. Those concerns are prompting investors to price in at least one interest rate cut over the next six months, bets that are likely to be reinforced by Friday’s retail numbers.

• Given the retail sector is seen as the leading indicator for overall consumer spending, the quarterly decline in sales will cement expectations the nation’s economy probably stalled in the final three months of the year.

• The retail sector’s woes represent the most visible symptom of Canada’s strained households, which are showing signs of fatigue as high debt burdens take their toll.

• Sales were up in seven of 11 categories, representing 49 per cent  of retail trade

• Building material stores reported the largest gain in December (+3.8 per cent), offsetting lower sales in the motor vehicle and parts sector (-1.3 per cent) and gasoline stations (-2.3 per cent).

• Retail e-commerce sales hit $2.6 billion in December on an unadjusted basis, a 4.7-per-cent share of total trade — the highest on record. E-commerce sales rose 31.5 per cent from a year ago.