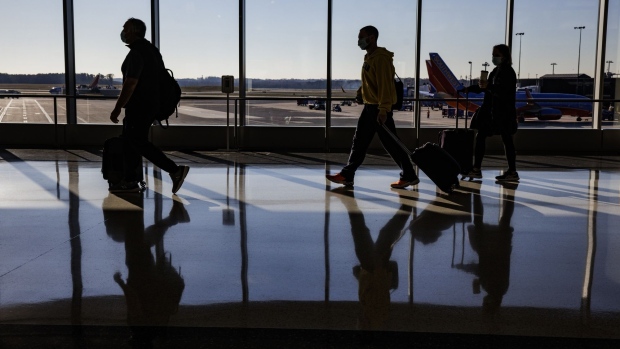 Travelers walk through the concourse at Baltimore–Washington Airport (BWI) in Baltimore, Maryland, U.S., on Wednesday, Nov. 24, 2021. Air traffic for the Thanksgiving holiday is expected to approach pre-pandemic levels and travelers are likely considering their plans with some dread, given fresh memories about thousands of canceled flights. Photographer: Samuel Corum/Bloomberg , Bloomberg

(Bloomberg) -- Two leading House lawmakers are calling on U.S. airlines to explain the series of flight disruptions earlier this year that occurred in spite of the government’s $50 billion in aid to limit industry layoffs during the Covid-19 pandemic.

The chairman of the House Transportation and Infrastructure Committee, Representative Peter DeFazio of Oregon, and the committee’s top Republican, Sam Graves of Missouri, in a letter dated Wednesday asked the industry trade group Airlines for America whether carriers had enough staffing to handle this season’s holiday traffic.

The inquiry comes on the heels of a similar effort by the Senate Commerce Committee, which tentatively asked chief executives of the seven largest airlines to attend a Dec. 8 hearing.

While acknowledging the challenges carriers have faced as a result of the pandemic, DeFazio and Graves said they expected airlines to “take whatever measures are available” to address staffing issues.

“As you know, travelers don’t care why their flight is delayed,” DeFazio and Graves said in the letter, which was seen by Bloomberg News. “They care just that it’s delayed.”

Airlines for America, which represents large U.S. carriers, didn’t immediately respond to a request for comment.

As the pandemic caused a dramatic drop in airline traffic -- passenger levels fell by more than 95% by April 2020 -- Congress included carriers in aid packages that provided about $50 billion to help cover payrolls to limit job losses and also created loan packages for the industry.

The Payroll Support Program was widely praised by airlines and their unions. While carriers imposed a variety of furlough and early retirement programs to cut costs, federal funds kept tens of thousands of workers employed. Restrictions imposed by Congress forbid use of payroll funds for such things as stock buy-backs.

As airline travel has rebounded in recent months, however, some carriers such as American Airlines Group Inc. and Southwest Airlines Co. have suffered mass cancellations and delays due at least in part to staffing shortages.

“We suspect that the voluntary separations coupled with a faster than anticipated growth in travel volumes may have rendered airlines less resilient when recovering from cascading disruptions and delays due to weather and other variables, like those we saw earlier this fall,” the lawmakers said in their letter.

They asked a series of questions including what was causing flight disruptions, how many jobs were saved by the federal payroll aid and what has led to any staffing shortages.

Passenger traffic has gradually returned since the early days of the pandemic, but is still below 2019 levels. In the past two weeks, which include the busy Thanksgiving period, an average of about 2 million passengers flew each day, according to Transportation Security Administration data. That’s 87% below the same period two years ago.

(Updates with attempts to reach trade group, in sixth paragraph)