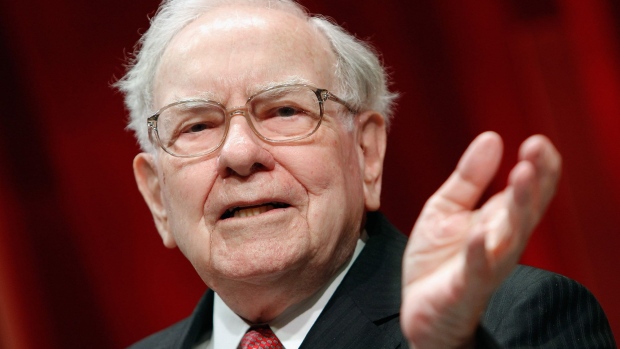 For that renewed interest, credit should go to Japan’s relative success in coping with the pandemic, as well as two men who are changing the way the world’s third largest stock exchange is being viewed.

Newly elected Prime Minister Yoshihide Suga, 71, and 90-year-old Warren Buffett, who in August placed a contrarian US$6 billion bet on Japan’s trading houses, are shaking foreign investors out of their reverie when it comes to the country.

Overseas investors bought 1.42 trillion yen (US$13.5 billion) in Japanese stocks in the week ending Oct. 9, the latest week for which data is available. That’s the most in more than 18 months and the fifth-largest amount on record. It follows a 530.9 billion yen net purchase the week earlier and marks a turnaround for a market that’s long been shunned in favor of sexier stocks in China or the FAANG shares.

“The ascent of Suga to prime minister tells us that if you liked Japanese equities before, you are going to love them now,” said Thomas Hayes, chairman of New York-based long-short equity manager Great Hill Capital. “If you didn’t like Japanese equities before Buffett’s investments, you have to at least take a look - if not at the whole market, at least at the trading companies.”

At the end of August, Buffett disclosed stakes in five venerable trading firms, all of whom were trading at discounts to valuations. The purchase was notable not only because it was a rare international foray for the Sage of Omaha but also for illustrating how much a market he once actively disliked had changed.

In a 1998 speech, Buffett decried Japanese firms’ low return on equity and the indifference of Japanese company managements to shareholders -- two areas where Suga’s predecessor Shinzo Abe made a difference, even if the former prime minister struggled to enact broader reforms.

“Buffett making a move is a strong signal to a lot of western investors, particularly value investors, that Japan is potentially one of the most discounted markets,” said Nick Schmitz, Japan portfolio manager at Boston-based Verdad Advisers. Japanese stocks are trading at just over 17 times forecast earnings, compared with 22 times for the S&P 500.

Suga was a public figure in the previous administration so isn’t strictly a fresh face. But a month into his premiership and the former son of a strawberry farmer is making progress on key campaign pledges. Unlike Abe, who made grand pledges of reform that were hard to carry out, Suga has focused on smaller targets with attainable targets.

The most prominent of these is a “digital transformation,” a wholesale revamping of Japan’s paper-heavy and inefficient public sector. The government is setting up a “Digital Agency”, working under the slogan of “Government as a Startup” to represent its move-fast approach.

To top it off, while U.S. politicians bicker over stimulus, Suga is powering ahead, with lawmakers reported to have asked for a 40 trillion yen (US$380 billion) package.

“Overseas investors are sort of brainwashed to think that stability in Japan means no progress, and that’s just wrong,” said John Vail, chief global strategist at Nikko Asset Management in Tokyo. “All of his goals seem very much in the right direction.”

Of course, it helps that Japan is coping relatively well with the pandemic. Almost every sector of society is open despite a summer resurgence of the virus. Balance sheets are still relatively healthy. And even with a change in leadership, Japan is politically stable, with no Brexit, threat of a contested election, or a trade war.

The Nikkei 225 has erased its year-to-date losses, the Nikkei 500 -- a broader group of stocks that contains the likes of Nintendo Co. -- has risen past its 1989 peak, and foreign buying on the Mothers startup index has reached new highs. 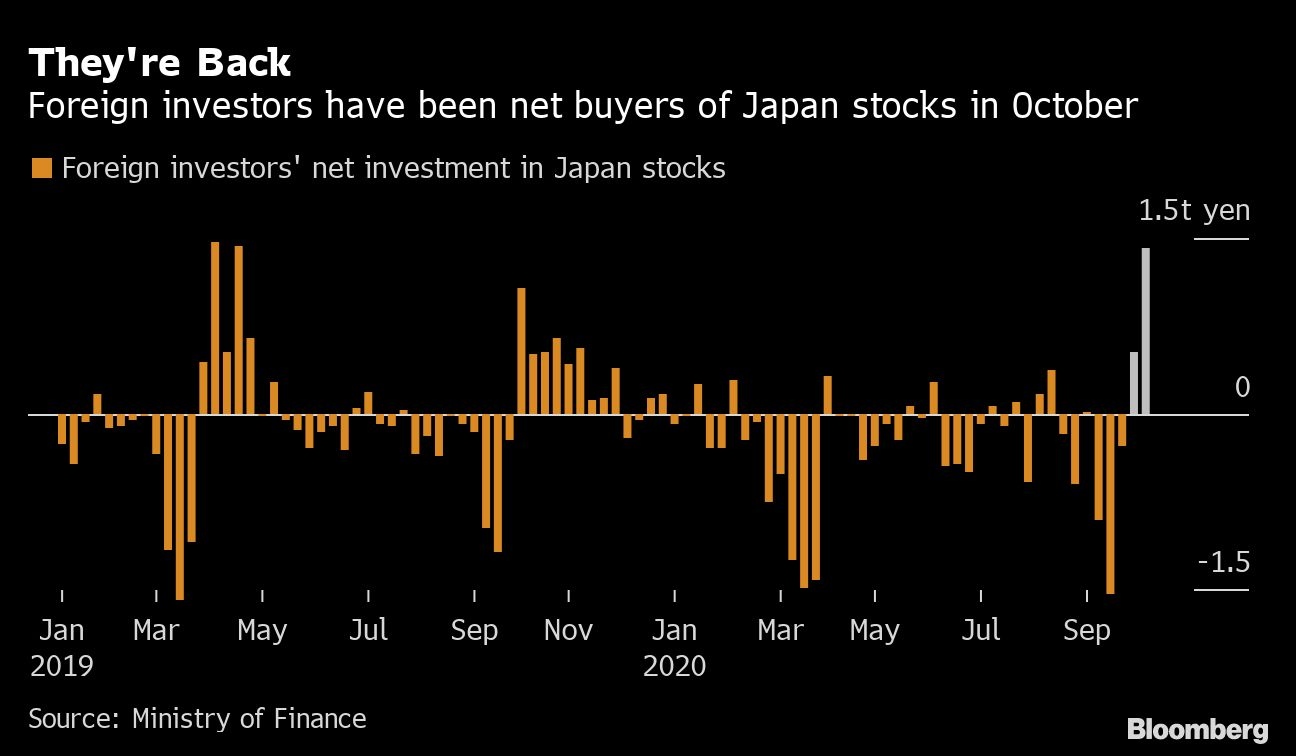 Goldman Sachs in an Oct. 6 report said Japan stocks could outperform on a combination of other points including M&A activity such as the US$40 billion NTT Docomo Inc. buyout, the fact that foreigners are already underweight Japan stocks, and a coming global shift to value.

While there’s plenty of good news of late in Japan, hurdles remain. Liquidity remains thin in many small-cap companies, and any investor putting their money in has to overcome a general “folklore pessimism” towards the market, said Schmitz. “For anyone from the age of 30 to 60, the stereotype of Japanese equities is the 1989 bubble,” he said.

And a share-price surge in Japan’s trading houses triggered by Buffett’s investment is already fading, due to a lack of fresh catalysts and a downturn in commodity markets.

Foreigners may find, however, that at some stage, Japanese stocks will be hard to ignore. Stocks rose every week last month, even as foreigners sold, a sign that domestic investors have strong expectations for the Suga administration, Tomo Kinoshita, global market strategist at Invesco Asset Management, wrote on Oct. 7.

“Perhaps the greatest benefit from Buffett’s investment will be the impression on domestic investors,” said Vail. “Japan doesn’t need foreign investors to rally.”