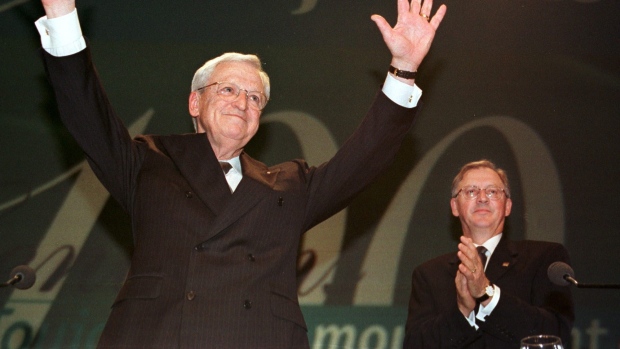 Beland was elected to the head of Desjardins in 1987 and was twice re-elected before retiring from the job in 2000.

The company says his accomplishments include profoundly transforming the credit union in his 13 years at the helm, overseeing its entry into the securities field and expanding the installation of automated tellers, in-branch insurance sales and its Acces-D website.

In a statement, the company described Beland as a "humanist and philosopher" whose influence extended far beyond the world of finance.

"Quebec is losing a great man, who was an ardent promoter of cooperative values," Desjardins Group President Guy Cormier said in a statement.

"Although he was occasionally critical of Desjardins, at the same time it was a testament to his deep attachment to this co-operative institution, whose presidency he assumed at a pivotal moment in his history."

Beland was born in Montreal in 1932 and began his career in law, where he specialized in co-operative enterprises before joining the financial sector.

He authored several books and lectured at universities, and remained involved in Quebec public life until his death, serving on committees studying electoral reform and financial regulation.

In recent years, he accused his former employer of having betrayed its social mission and having transformed its members into clients. He was especially critical of the company's decision to withdraw ATMs from rural areas, and for last year's breach of millions of members' personal data -- including his own.

Beland was named a Grand Officer of the Order of Quebec in 2014 for his service to the province and his involvement in numerous organizations.

"Claude Beland was a great man, who helped build Quebec into what it is today," Trudeau wrote on Twitter. "Our thoughts go out to his family and loved ones."

Claude Béland was a great man, who helped build Quebec into what it is today. Our thoughts go out to his family and loved ones.

Legault praised Beland for his social involvement, which he said helped to advance Quebec.