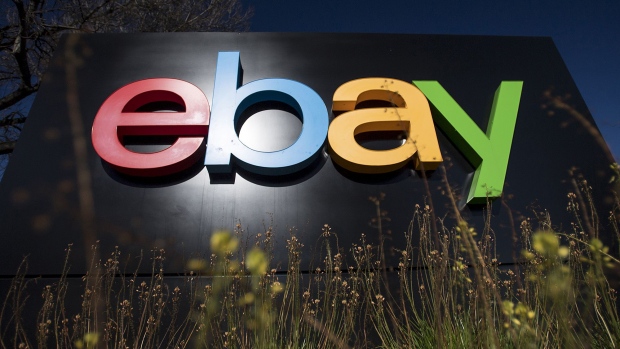 EBay Inc. signage is displayed at the entrance to the company's headquarters in San Jose, California. , Photographer: David Paul Morris/Bloomberg

Four former eBay Inc. employees will admit to conspiracy to commit cyberstalking in an elaborate scheme to intimidate a blogger critical of the company.

The four were lower-level employees and don’t include eBay’s former senior director of safety and security, James Baugh, or former director of global resiliency, David Harville, both of whom deny wrongdoing.

The four will appear at a plea hearing set for Oct. 8, according to a federal court docket and confirmed by a spokeswoman for the U.S. attorney in Boston. They will also will admit to conspiracy to tamper with witnesses, the spokeswoman said. It wasn’t immediately clear whether they are cooperating with prosecutors.

Together with Baugh and Harville, the four -- Brian Gilbert, Stephanie Popp, Stephanie Stockwell and Veronica Zea -- are accused of carrying out a harassment campaign last year against a suburban Boston couple who put out the newsletter. The campaign allegedly included sending them a bloody pig mask, a funeral wreath and other disturbing items.

Devin Wenig, president and chief executive officer of eBay Inc., listens during a Bloomberg Television interview at the eBay Open conference in Las Vegas, Nevada, U.S., on Wednesday, July 23, 2019. Wenig discussed the launch of a new delivery service for sellers to debut in 2020.

The U.S. announced the charges against them in June. Charges against a seventh former eBay employee, who supervised security at the online auctioneer’s European and Asian offices, were announced in July.

Former eBay chief executive officer Devin Wenig, who isn’t charged, last year texted a colleague expressing worry and anger over the unflattering coverage. What followed, prosecutors said, was a criminal plot by his underlings to cyberstalk the couple.

While there’s no suggestion in court papers that Wenig knew of the plot, prosecutors say his angry emails and texts triggered the scheme, and they play a central role in the narrative spelled out by the government.

“Take her down,” Wenig is alleged to have written in response to a post by the blogger.