Orders at factories are piling up as companies around the world struggle to meet demand amid a damaging mixture of the coronavirus and widespread bottlenecks in supply chains.

In Europe, unfilled orders rose to an unprecedented level in August, according to an IHS Markit survey of purchasing managers. The strains are denting confidence in Germany, where big names from BMW AG to Siemens AG have warned supply problems could persist into next year or even longer.

For Asia, the situation is being compounded by one of the world’s worst COVID-19 outbreaks. Disruption from lockdowns has forced factories to halt or slow production, and survey readings point to contraction in a number of countries. 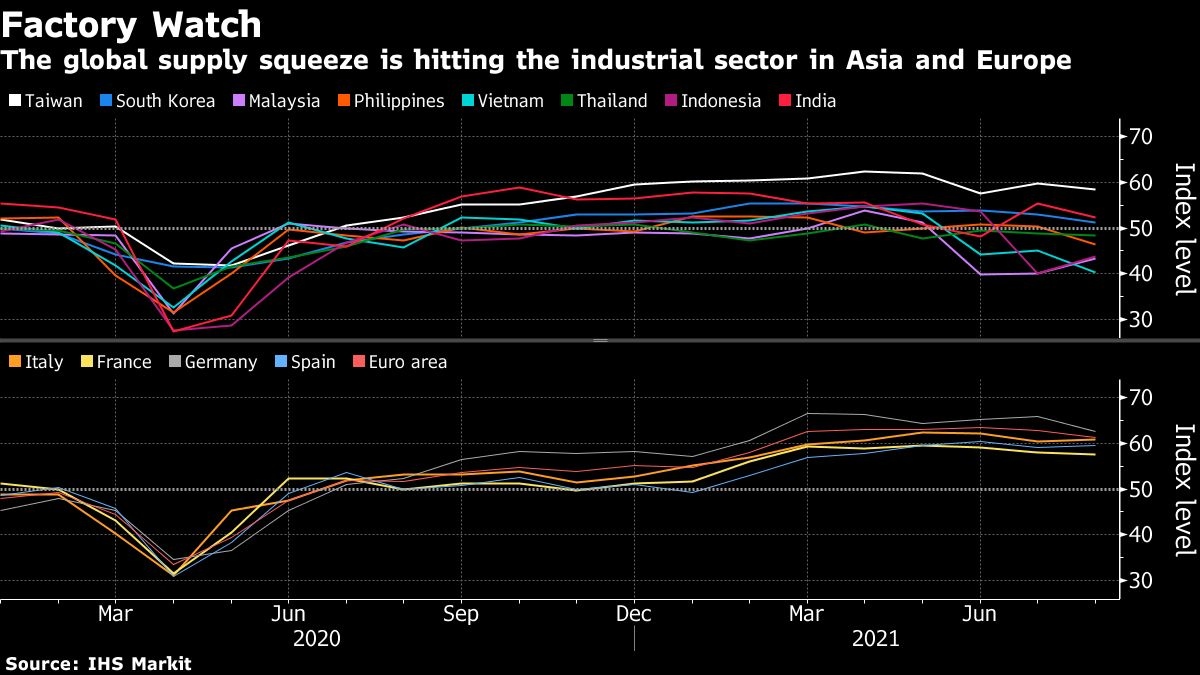 The combined forces of the delta variant of the coronavirus, shortages of parts and raw materials, and a lack of shipping capacity are creating troubling hurdles for worldwide goods trade, which had been a pillar of the global economy earlier in the pandemic.

Manufacturing purchasing managers’ indexes for Indonesia, Vietnam, Thailand, Philippines and Malaysia all had readings far below the 50 point level that separates contraction from expansion, IHS Markit said Wednesday. In Europe, euro-area manufacturing activity slipped to 61.4 from 62.8 a month earlier.

“Industry continues to expand across the bloc, albeit at a softer pace, signalling that the peak is likely behind us,” Mateusz Urban, an economist at Oxford Economics, said in a report on the euro-zone data. “Lingering supply-side issues and related producer price pressures might take longer to resolve than previously expected.”

IHS Markit said the numbers in the euro area are “clear signs of strong capacity constraints,” and suggest the pace of rebound growth has peaked.

The interconnected world economy means isolated disruptions -- from factory lockdowns to a port disruption -- can quickly ripple across supply chains. It’s all coming at a particularly sensitive time for global trade, as overseas buyers rush to ensure their shelves will be stocked in time for the year-end holiday shopping season.

“Asia’s August PMIs show the delta variant outbreak dealing blows to economies across the region, with the heaviest hits landing on services. The weakness could prompt governments and central banks in some economies to add more growth support.”

In the U.S., the August ISM manufacturing report due later on Wednesday is expected to show a slowdown in activity. The survey will also “reinforce that stretched supply chains are weighing on economic growth,” according to Bloomberg Economics.