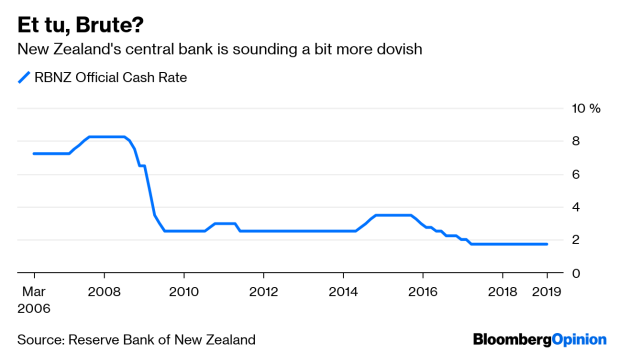 (Bloomberg Opinion) -- India's interest-rate surprise is looking more like a good one. In what may seem like an odd pairing outside cricket contests, New Zealand may have just validated the subcontinent’s contentious cut.

Inflation figures published Tuesday showed an easing in the pace of India's consumer-price increases in January. That's what you want to see if you’re going to shock people with a reduction in borrowing costs, as the Reserve Bank of India did last week.

Beyond that, there's a broader question that India and China pose for Asia. Those that haven’t eased policy or are hesitant to signal a shift: What are you waiting for? Indonesia, the Philippines and Thailand look like a minority.

Even New Zealand, pioneer of the inflation target, is sounding a bit more dovish. The Reserve Bank of New Zealand pushed out its forecast for a hike to 2021 on Wednesday and said the next move could be up or down.

The sacramental nature of inflation targets and whether they do more harm than good has become a subject of debate. Nevertheless, the RBNZ’s turn has a whiff of “Et tu, Brute?” to it.

While Kiwis are a loudly patriotic bunch and will hate the comparison, the RBNZ’s message echoed that of its Australian counterpart. Last week, the Reserve Bank of Australia discarded its long-standing predilection to tighten.

The trend is almost impossible to miss. The global tilt toward easing is on. At a minimum, the scrapping of normalization – a term in vogue the past couple of years – is the new mainstream. Small players risk getting trampled if they prevaricate.

Which brings us to Southeast Asia. The Philippines and Indonesia were aggressive in hiking during 2018 to keep up with the U.S. Federal Reserve. While the duo are no longer nudging rates up, that looks like a very low bar. Smoke signals from the central banks don't suggest any cut is imminent. That’s a pity. If you can be assertive on the upside, surely there's at least some room on the way down.

Emerging Asia's two biggest economies are unambiguously juicing activity. Not only did India lower rates on Feb. 7, the central bank adjusted its bias to convey there are more in the tank. China has reached for fiscal and monetary tool kits with cuts in taxes and bank reserve requirements.

Beijing's steps are fitting, given faltering growth in China is rippling through the region and beyond. The Fed, the world's monetary big dog, looks like it's done with increases, at least for now. As I wrote here, the Fed's abstinence is a huge gift to Asia. It frees emerging markets in the region, and elsewhere, to combat the effects of China's downdraft on domestic conditions.

Yes, any prolonged discussion of Indian monetary policy brings in politics. Prime Minister Narendra Modi, facing elections by May, is now on his third central bank governor in as many years. That doesn’t mean the new RBI guy was wrong to stimulate the economy.

Not only does slowing inflation make India’s choice look better. The traditional sanctum of inflation targets, New Zealand, has helped as well. It’s direction that matters.