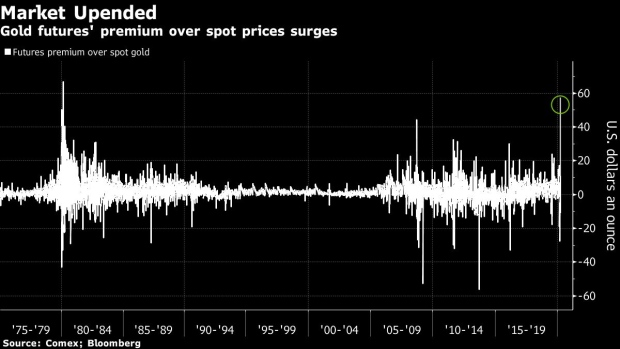 A worker stacks 12.5 kilogram gold bullion bars at the Valcambi SA precious metal refinery in Balerna, Switzerland, on Tuesday, April 24, 2018. Gold's haven qualities have come back in focus this year as President Donald Trump’s administration picks a series of trade fights with friends and foes, and investors fret about equity market wobbles that started on Wall Street and echoed around the world. Photographer: Stefan Wermuth/Bloomberg , Bloomberg

(Bloomberg) -- The gold market in New York is facing a massive squeeze with the coronavirus pandemic disrupting the entire supply chain for deliveries just as investors are making a run on precious metals.

At issue is whether there will be enough gold available in New York to deliver against futures contracts traded on the Comex in New York with metals refiners shutting and efforts to contain the virus halting planes. To further complicate things: Only certain types of gold bars fit the specifications. As of Monday, open interest in the April gold contract stood at 195,604 contracts, equivalent to 19.6 million ounces. The total deliverable stocks in Comex warehouses were 8.7 million ounces.

“This isn’t anything that we’ve seen in a generation because refiners never had to shutdown – not in war, not in the great financial crisis, not in natural disasters,” Tai Wong, the head of metals derivatives trading at BMO Capital Markets, said by phone Tuesday. “It’s never happened. And it happened astonishingly rapidly.”

The concerns over supply and the rush on gold purchases has sent futures in New York skyrocketing to the highest premium over spot gold in London in decades and underscores how desperate investors are to find a safe haven amid the market tumult brought on by the virus. The last time the New York-London spread was this massive was in the 1980s when the Hunt brothers attempted to corner the silver market and sent gold futures soaring to a high of $850 an ounce, record it didn’t surpass for 25 years.

A London trade group representing gold market participants said Tuesday that it’s working with Comex and others to “facilitate physical delivery in New York” and “ensure the efficient running of the global gold market.” The volatility in Comex futures has affected liquidity, the London Bullion Market Association said in a statement.

Another indication of the squeeze on gold futures: The April contract was trading more than $20 an ounce above the most-active June futures on Tuesday.

The virus has upended the global supply chain for precious metals. Metals refiners in Europe are being forced shut. Ordinarily, banks and traders would ship supplies from other locations to New York in response to such a large Comex premium over the spot London market. But because of the outbreak, some have been reluctant to take advantage of the arbitrage out of fear that flights and truck deliveries will be canceled and trap their supplies, according to one senior trader, who asked not to be identified because the information isn’t public.

Peter Thomas, a senior vice president at Chicago-based broker Zaner Group, said that a similar dynamic was playing out in other precious metals markets such as silver.

“This hasn’t happened before, and this is very unique: We have a situation where there is silver available but no one will deliver it,” he said. “They won’t load the trucks. They won’t load the planes because the coronavirus. Even though there is product around they won’t pick it up.”

Switzerland’s refining industry, a major hub for processing gold into bars and coins, has largely shut down because of the virus. At the same time, flights are being grounded globally, leaving some large dealers unsure of whether they’ll be able to transport bullion around the world as normal.

Gold futures Gold futures for June delivery climbed as much as 7.7% to $1,693.50 an ounce in New York. At Tuesday’s peak, futures had a $67.57 premium over spot prices in London. Based on closing prices going back to the mid-1970s, the biggest spread between a most-active contract and spot gold was $67 in 1980, data compiled by Bloomberg show.