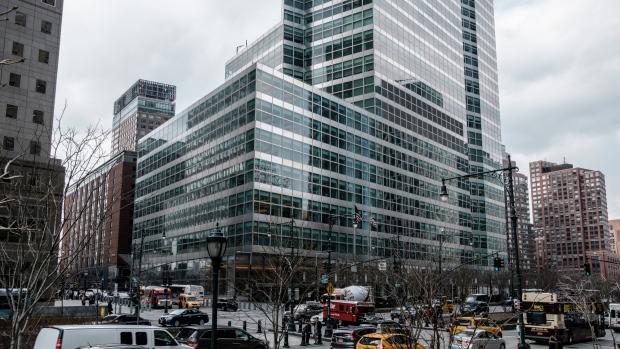 That might be a bitter pill to swallow for stock pickers, who have been steamrolled by the rise of passive investing. But Goldman strategists led by Jessica Binder-Graham point out in a research note that some ETFs are trading in almost lockstep with their equity holdings while at the same time have much more liquidity, making them money savers in the current market environment.

“There is a business case that active managers could better utilize passive vehicles in the short term to help manage in and out of stock positions, particularly in periods of market volatility and stress,” the strategists wrote. “One area that seems relatively less explored is the potential to be a source of liquidity.”

The research is the latest from Wall Street showing how active funds can fight back in the face of the onslaught of passive vehicles. Last year, strategists at Deutsche Bank came up with a trade that they say can help investors beat equity benchmarks by building portfolios out of stocks that get whipped around the most when ETFs rebalance.

Passive products now account for less than 4 per cent of the total assets managed by active funds, according to data compiled by Goldman. With the market’s ability to absorb transactions without affecting share prices stuck near multi-year lows, the benefit of employing ETFs has become something managers can’t ignore, the firm’s strategists say.

A Goldman measure of liquidity for single stocks has fallen 64 per cent since mid-2017. After a brief bounce earlier this year, conditions have worsened again as the market sold off this month. Liquidity is quickly approaching the bottom seen in December, when stocks tumbled to the brink of a bear market.

Thin liquidity is perhaps one reason why this year’s rally hasn’t reduced the incidence of single-session wipeouts for individual stocks. As of May 2, a total of 33 S&P 500 companies suffered single-day losses greater than 10 per cent, data compiled by Bloomberg showed. That’s virtually the same as last year, one of the worst stretches of turbulence since the financial crisis.

The advantage of trading ETFs versus single stocks is noticeable, according to Goldman. Over the past year, the bid-ask spread for the average ETF is roughly 40 per cent tighter than that seen for its constituents. In other words, buying and selling ETFs tend to lead to smaller swings in prices, effectively lower costs.

Goldman offered an example on how the strategy might work. In December, People’s United Financial Inc. and SPDR S&P Regional Banking ETF (ticker KRE) were moving almost in sync, with a correlation of 0.92. Yet the average bid-ask spread averaged 2 basis points for the ETF, compared with 6.6 basis points for the lender. Meanwhile, volume in KRE was more than 10 times higher.

Investors who’d like to get rid of shares of People’s United could sell the equivalent exposure via the ETF and then manage out of the stock while closing the fund position without taking on significant tracking error.

“One could argue the KRE could be used as a more cost-effective way to synthetically get out of the PBCT position,” the strategists wrote.

Not all ETFs fit the bill. A lot of them don’t offer more liquidity than the underlying stocks or don’t track them closely. Below are some funds that Goldman says meet both criteria: