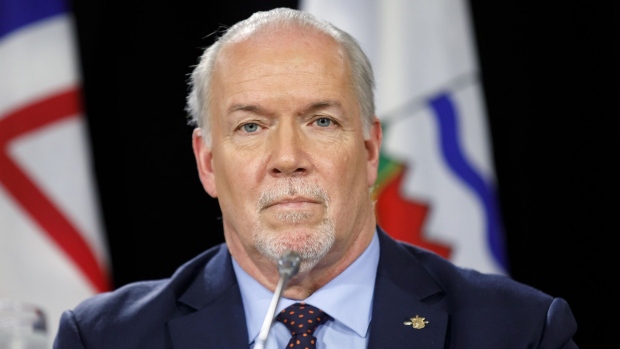 VANCOUVER - B.C. Premier John Horgan says his decision to call for an election started to crystalize in the summer when his minority government ran into legislative challenges.

Speaking in North Vancouver on Tuesday, the leader of the NDP acknowledged there has been “extraordinary co-operation” between Health Minister Adrian Dix and the opposition parties when it comes to tackling COVID-19.

But he said “contempt” and “acrimony” between the parties would divert focus away from managing and recovering from the pandemic, and the best way to “put the politics behind us” was to hold an election.

“We need to be sure that the public is with us and the best way forward is a stable government,” he said.

Horgan assured voters that provincial health officer Dr. Bonnie Henry has made it clear to him that the election set for Oct. 24 can be held safely.

“Our campaign and I assume other campaigns will be focused on making sure that we're staying in a line with the public health orders that Dr. Henry has in place.”

B.C. Liberal Leader Andrew Wilkinson has called for three televised debates during the provincial election campaign so voters can hear what each party has to offer.

Voters need information and debates are the best way to provide it during the COVID-19 pandemic, Wilkinson said Tuesday.

He said voters need to hear his vision as well as that of Horgan and Sonia Furstenau, leader of the Green party, on issues including employment, child care and addiction.

“We're putting out the message to British Columbians that they need more information in this election. It's a pandemic election and we've never done this before,” Wilkinson said, noting voters won't have access to party leaders at large gatherings like in typical campaigns.

Horgan said he would not be involved in a decision to hold the three debates, but he added he's happy to talk to people in any format that's safe and allows a full “airing of the issues.”

Wilkinson began the first day of the campaign by touting the Liberals' candidates so far, adding he expects to have an entire slate by the end of the week.

He highlighted transportation as a big need in Surrey, the fastest-growing city in the province, and said those working in the trucking and taxi industries also need certainty about their jobs. Wilkinson also accused the New Democrats of failing to deliver on education promises to get rid of portable classrooms in Surrey schools.

He said the Liberal party expects to release its election platform in about a week, while Horgan said the NDP is also working on a platform that will be released prior to the election.

Wilkinson and Furstenau have criticized Horgan's decision to call a snap election. A fixed election date had been set for October next year.