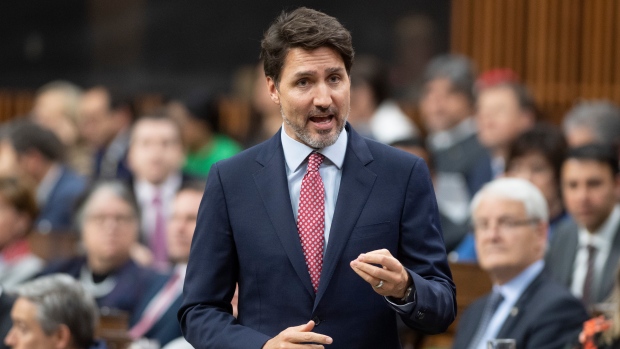 Prime Minister Justin Trudeau responds to a question during Question Period in the House of Commons Wednesday, February 19, 2020 in Ottawa. , The Canadian Press

OTTAWA -- A sweeping federal economic stimulus package to combat the shock of COVID-19 is now to be unveiled Wednesday, Prime Minister Justin Trudeau says, and could soon be before an emergency sitting of Parliament to help get money to those who need it.

Speaking outside his Ottawa residence on the grounds of Rideau Hall, Trudeau said MPs and senators would likely be called back to quickly approve the emergency spending.

He cited potential changes to the employment insurance program -- the eligibility for which is set by Parliament -- and other methods to get money into the pockets of Canadians.

Trudeau said the government is also planning changes to upcoming tax deadlines to provide more flexibility for businesses and taxpayers. Those details are expected later this week.

The government spending is likely to be significant -- approximately $20 billion by the estimates of many economists, or one per cent of the value of the national economy.

Deputy Prime Minister Chrystia Freeland hinted the dollar figure could be around that much when the final details are unveiled. She also said the government plans to model the bailout on what other countries have already done, singling out Singapore as an example.

Singapore released a spending package in February of roughly one per cent of its GDP, with a focus on helping businesses retain local workers through wage supplements, plus aid to companies in the form of business tax credits and cash to innovate once consumer spending rebounds.

It also targeted help at particularly hard-hit sectors like tourism and air travel.

"We understand the seriousness of this situation and the federal government absolutely understands that we need to, and we will do, whatever it takes to ensure our economy can weather the storm," Freeland told a news conference Tuesday.

"This is economically a unique situation because on one hand, the very important measures we are taking to (protect) the health and safety of Canadians simultaneously are leading to a reduction in economic activity."

The reduction in economic activity has been sharp and fast. On Tuesday, TD Economics projected growth at 0.2 per cent in Canada this year, a tiny amount by recent standards. The Bank of Canada said the economic shocks will be doubly problematic for the country with oil prices sliding lower amid a price war between Russia and Saudi Arabia.

North American markets have been on their own slide, despite moves by the Bank of Canada and the U.S. Federal Reserve to ease access to credit and slash interest rates. Much hope now rides on the fiscal stimulus from federal governments.

The Liberals have debated moves like temporarily boosting the Canada Child Benefit and providing grants to workers who don't qualify for employment insurance, such as gig economy workers.

"Policy specialists normally attempt to perfect the details of transfer programs in order to balance the targeting of benefits, negative incentive effects, and overall costs. These policy design considerations are vital in ordinary times," he wrote in an online commentary for the C.D. Howe Institute.

"These are not ordinary times. Instead, we must prioritize speed over all else, because family incomes will be stretched starting now."

Globally, there are more than 180,000 confirmed cases of COVID-19, including more than 440 cases in Canada. Five deaths have also been reported, including one in Ontario.

Many of the cases are connected to travel. The country's chief public health officer, Dr. Theresa Tam, says she is concerned about cases not linked to travel, including three in Ontario, which suggest the virus is spreading undetected.

The Public Health Agency of Canada says most people who test positive for COVID-19 experience manageable symptoms like a fever and cough. For some, such as seniors and those with compromised immune systems or pre-existing conditions, the illness can be more severe.

A cabinet committee overseeing Canada's response to the virus met Tuesday morning, where ministers discussed asking provinces and Parliament to provide the government with broad powers.

The Emergencies Act has not been used since it came into effect in 1988. It gives the government, subject to parliamentary oversight, power to act in exceptional situations where it feels existing legislation is inadequate to deal with a scenario that endangers the lives and safety of the public. Those measures could include regulating the movement of people and goods.

Ontario declared a state of emergency Tuesday morning, along with promising a $300-million aid package for people suffering as a result of isolation measures and quarantines. Alberta did so later in the day, ordering an end to almost all gatherings of more than 50 people. British Columbia followed other provinces by closing its schools.

Trudeau downplayed the need to invoke a national state of emergency, saying the government is looking at other ways to provide help.

But he warned the situation in the country around COVID-19 -- and the emotional stress it has caused -- could last weeks or months.

Speaking at a White House briefing, U.S. President Donald Trump said his administration is working closely with the Liberal government to keep the border open a day after Trudeau announced limits on who could enter Canada by air. Trump wouldn't say if the U.S. would close its northern border.

In a further move announced Tuesday, Parks Canada said it will suspend visitor services at all national parks and historic sites starting Thursday. In a release, the agency warned as well that search and rescue services may be limited for anyone using front country and backcountry areas as well as accessible green spaces.