Canadian builders began 2020 with a strong rebound in housing starts that is good news for the nation’s increasingly tight real estate markets.

Work began on an annualized 213,224 units in January, up 8.8 per cent from a revised 195,892 in the prior month, Canada Mortgage and Housing Corp. said Monday in a statement. Economists in a Bloomberg survey had anticipated starts would be 205,000.

It’s the highest level of new construction in four months, after a slowdown at the end of 2019, and suggests builders may be responding to the recovery in demand in some of the nation’s largest housing markets. At the same time demand is increasing, a shrinking supply of available homes is driving up prices in several cities.

“With recent data pointing to further tightening in demand-supply conditions in many resale markets, a solid pace of home building to start the year will be welcomed,” Josh Nye, a senior economist at RBC Economics, said in a note to investors. 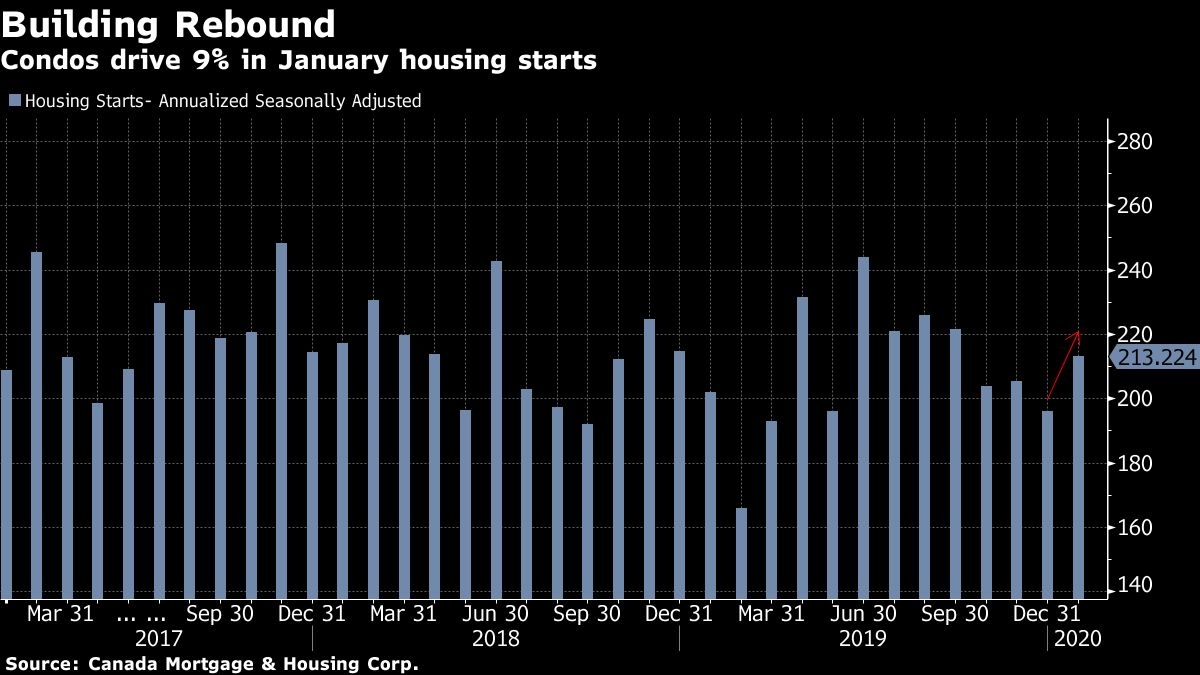 In a separate report Monday, Statistics Canada said building permits rose 7.4 per cent in December, more than double the 2.8 per cent median forecast from economists. The increase is consistent with the housing starts data for January, and included a 47 per cent surge in Toronto intentions, the most 2014.

A combination of steady population growth, low unemployment and cheap borrowing costs have brought buyers back into markets that had been lackluster for much of 2018 and early 2019. Combined with shrinking supply, the rising number of buyers has driven bids for homes higher in places like Toronto, where benchmark prices are up 9 per cent over the past year.

Starts in Toronto were up 51 per cent from December, on a seasonally adjusted basis, CMHC said. Montreal, another market that has been doing well, saw starts rise 53 per cent.

Overall, Canada recorded a 13.6 per cent jump in multiple urban starts during the month, while single-detached starts fell 0.9 per cent.