How FansUnite is positioned for play in Europe, North America - and esports betting - BNN Bloomberg
{{ currentBoardShortName }}
Markets
As of: {{timeStamp.date}}
{{timeStamp.time}} 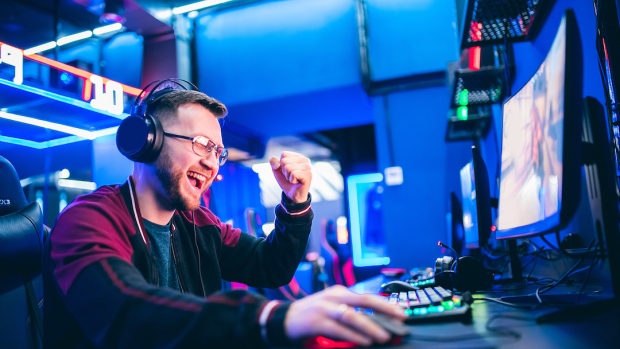 FansUnite is tapping in the online gaming market, which has grown considerably throughout the year. , Market One Media

The COVID-19 pandemic has accelerated an evolution in gambling that has been underway for the last few years.

While casinos, horse tracks, and betting on sports remain a multi-billion-dollar business, there has been a noticeable shift online and into new fields, like esports. Although in-person gaming has modernized, with a move towards electronic transactions both for convenience and to combat fraud and money laundering, the pandemic ultimately shut down many of these in-person venues.

In 2020, Vancouver-based gaming industry veteran, Scott Burton, was in the process of taking his company, Askott Entertainment, public when the first health restrictions came into effect in March.

The two men put their heads together, and in June 2020, announced that FansUnite would acquire Askott to create one of Canada’s largest gaming companies. With reach into both the business-to-business sphere with a white-labelled technology platform available for licensing with other brands and their own direct-to-consumer offering allowing players to come onto their sites to place bets on various games/matches, the merger created a fully integrated iGaming company with international presence.

As a combined force, FansUnite has been expanding by gaining licenses to operate in Europe; forays into the U.S., Scotland, and Brazil; launching their own games; and partnering with established companies in the field.

“We’re aiming to be a full gaming platform,” Burton says. “COVID brought us together.”

Burton is CEO of the new entity, while Eghdami is President. Both accountants by training, they share a focus on the underlying business and technology of gaming – and meeting the rules to prevent abuse.

A growing interest in online gaming

With COVID driving more interest in online gaming while in-person options are restricted, FansUnite is launching its own online casino games. They are partnering with existing online gaming brands and are moving into under-served markets, while also tapping into esports and virtual gaming.

They are also rolling out new offerings such as virtual horse races and virtual sports games to fill a void left by the restrictions. Players unable to sit at casino poker tables are moving towards online poker and other card tables with a live dealer, who can be anywhere in the world. The result is a more interactive experience.

FansUnite also recently announced a partnership with The Ear Platform, a company with approximately 6,000 online casino games, and licensing in Europe through Malta. This deal will give the company’s Askott Games division access to more than 120 online gaming sites they are integrated with to seamlessly incorporate their games with a single API.

Many of these trends were already happening before the pandemic, and like many things, will likely stay in place afterward as people have come to like the digital options.

To tack onto FansUnite’s accolades, the company partnered with GameCo to create the first esports sportsbook in the U.S. with the Sky Ute Casino in Colorado. A move like this gains the company significant exposure in the U.S. esports betting market, allowing them to garner that sought after first-mover advantage.

Validating the company’s technology, a partnership into the real money esports sportsbook space in the U.S. represents a major step forward in their roadmap and opens the first of many doors into a quickly growing market.

The pair figure the timing for a new Canadian gaming company with global ambitions is right – and not just because of COVID. Both Canada and the U.S. are taking a serious look at modernizing gambling rules to allow more online and single-game action by private providers, rather than government-operated monopolies, opening up domestic opportunities in North America.

“This seems to have momentum right now,” Burton explains. “Some of the Canadian talk to change rules and open up online gaming to outside operators is partly driven by COVID. In North America, we see nothing but growth after the pandemic.”

The Canadian Gaming Association estimates the annual spend on gambling in this country alone is already at $13 billion. The U.S. and European markets are larger.

With this approval, the company will also be joining other highly respected gambling companies such as PokerStars, Betfair and Unibet in operating their business within MGA regulations.

What’s more, with the MGA licenses, FansUnite will also receive full credibility as a trusted betting platform supplier and casino operator in Europe, which will result in the company gaining significant recognition in the online gambling market.

FansUnite has already been focused on providing consumer services tailored to underserved markets, utilizing the flexibility allowed by having its own technology platform to pivot and offer local service rapidly.

Their McBookie service, which finished October 2020 with the highest monthly revenue in its 10-year history, offers online gaming in Scotland, focused on sports that are locally popular      in the country. With sports declining during the pandemic, they’ve added new online casino games, virtual sports and casino games with live dealers.

“Not many people are looking at just Scotland,” Burton says. “We can go in and be the most dominant sportsbook in Scotland.”

They’ve just opened a similar offering in Brazil, another underserved market – with different sports, different payment methods, and in Brazilian Portuguese rather than Scottish English.

While the company is new, the founders have years of experience in the industry and were able to draw on their contacts to build out the expertise needed to take the company global, and fast. Through it all, their technology has been key.

Robust technology supporting a strong gaming experience tailored to diverse local interests and languages while meeting regulations for combating fraud and money laundering can be complex. Additionally, hiring other firms to provide it can get expensive and leaves a gaming company subject to the sale or other changes at their provider, and their culture.

Building their own technology platform allows FansUnite to rapidly adjust it to the regulations and interests of different jurisdictions, without having to pay another company to license their platform.

“One of the beauties of our model is we get a monthly license fee from our partners, and then we share in the upside of that,” Burton says.

One key focus of their technology is making payments easy for both the user and the gaming brand.

“Payments are the biggest headaches in online gambling. Getting money into the sites is sometimes the hardest thing,” Burton says, noting every country has different preferences and rules for payments – some using credit cards exclusively, others banning them and requiring bank transfers.

As a result, FansUnite built the technology platform in such a way that they can turn on and off payment systems geographically, allowing them to tailor the approach to the local jurisdiction and quickly adapt to any changes in the law.

Not just a Canadian small-cap

The Canadian company has teams in Vancouver, Ireland, the Ukraine, Malta, and Kazakhstan, giving them deep insights into local preferences and a variety of languages, as well as servers in multiple locations around the world.

“People may look at us as a Canadian small-cap, but it’s taken us years to build this out,” Burton explains. “We have a gambling company, we’ve built the infrastructure over the course of years, and now we’re ready to grow and scale.”

Which is exactly what they are doing. The company recently announced an upsized brokered private placement led by Gravitas Securities to raise up to  $11 million, up from $5 million, due to strong investor demand. This upsizing is more than double what the FansUnite team initially set out to raise.

Such an increase solidifies the trust placed by the investment community in the longevity of esports and online gaming as a whole. The proceeds raised are to be used as working capital and general corporate purposes, helping the company attain an even more successful 2021.

Moving into a global esports industry worth over $1 billion

Before the pandemic, esports was gaining popularity, but in the last few months, its popularity has significantly increased. Now, it’s expected that global esports revenue will grow to $1.1 billion by the end of the year coupled with audience growth hitting approximately 495 million people.

Now, similar to physical sports, esports has been driven online, opening up new opportunities for tech-based gaming companies like FansUnite. The company has an entire online esports division forming, which is remarkable timing.

Another key to the company’s success is having a strong regulatory and anti-fraud play. FansUnite has independent anti-money laundering officers in their key locations and has integrated anti-fraud measures such as ‘risk triggers’ into their technology.

Their software looks for suspicious activity such as trying to withdraw money using a different method from deposit or moving money between multiple accounts and blocks a user from moving money out of the system until someone looks at the case and completes stringent verifications.

While their focus is online, those fraud systems are also making FansUnite’s software interesting in in-person venues — say, a horse racing track interested in moving from paper slip betting to a digital system using credit cards and online accounts to both make betting more convenient and resistant to money laundering.

“If a person is required to set up an account online and know that every transaction is auditable, that answers a lot of the problems,” Burton notes.

Having earned regulatory approval in Malta, which has stringent anti-fraud and money laundering requirements, opens up doors for FansUnite in jurisdictions such as Canada and the U.S. which are trying to catch up and get tough on the financial crimes, and will look to Europe for an example.

“That should give people confidence,” Burton adds.

Burton also says that FansUnite anticipates over $1 million net consolidated revenue this year, but with the new streams they’re opening up, they are looking to extend that to $5-6 million in 2021 and $15-16 million in 2022.

2020 has been a busy year for the company, but they aren’t slowing down any time soon. Investors can look forward to more acquisitions, significant revenue growth, additional gaming licenses, M&A opportunities, and more.

Follow FansUnite on social media for the most up-to-date news: