Today's non-denial from HSBC is not terribly surprising: Gabriel Dechaine

National Bank of Canada could be the most motivated buyer in the sweepstakes for HSBC Canada, according to one analyst.

Mike Rizvanovic at Keefe Bruyette & Woods said the Montreal-based lender "could have the most compelling reason" to buy HSBC's operations in this country after the global banking giant confirmed that a sale is being considered in a strategic review.

"A deal could provide [National Bank] with instant meaningful geographic diversification to Western Canada and sizable earnings per share accretion of about eight per cent," he stated in a report to clients Tuesday night.

It’s a contrast to what one of his peers stated earlier on Tuesday. Nigel D’Souza at Veritas Investment Research told BNN Bloomberg he doesn’t see an obvious buyer for HSBC Canada among the Big Six banks. He highlighted that National Bank’s strategic focus is still its home province of Quebec and that he hasn’t observed any desire to expand nationally.

HSBC’s Canadian division had $120.8 billion in assets as of the end of March, the bank said in a mid-year factbook. The branch network included 134 locations across the country as of the end of the first quarter, with the most significant concentration in Ontario (52) and British Columbia (47). 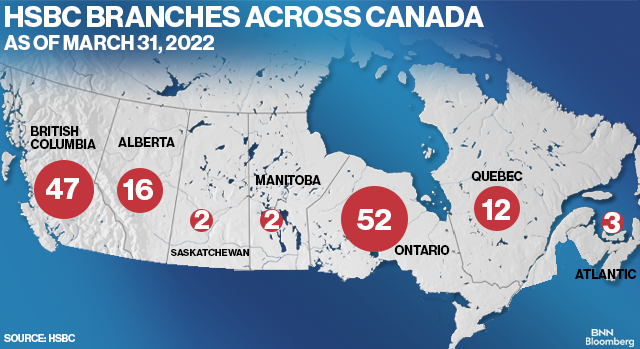 Rizvanovic said he thinks Royal Bank of Canada is the only Big Six institution that could cover the cost of a takeover, which he estimates could reach as much as $8.5 billion, with existing excess capital. However, he said HSBC Canada would deliver a more modest earnings boost to RBC at about five per cent