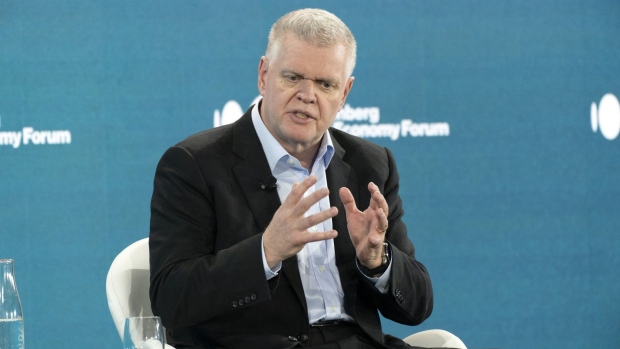 “Our ambition is to be the leading bank supporting the global economy in the transition to net zero,” he said in a post on LinkedIn. “I hope my colleagues, customers and others will all know, from our work and my public comments, that HSBC is absolutely committed to a net zero future. Given our global reach and capabilities we have an obligation to lead.”

Quinn was responding to remarks by Stuart Kirk, the head of responsible investment at the bank’s asset management unit, who criticized the bank for paying too much attention to climate and other environmental and social issues at a conference on moral investing.

“Climate change is not a financial risk that we need to worry about,” Kirk said Thursday in a 15-minute presentation at the Financial Times conference. “There’s always some nut job telling me about the end of the world.”

Kirk, who’s responsible for integrating ESG risks and opportunities across asset classes at HSBC Asset Management, also took aim at former Bank of England Governor Mark Carney and other policy makers for talking up the risk from climate change.

“I completely get that at the end of your central bank career there are still many, many years to fill in,” he said. “You’ve got to say something, you’ve got to fly around the world to conferences, you’ve got to out-hyperbole the next guy. But I feel like it is getting a little bit out of hand.”

“I work at a bank that is being attacked by crypto, we’ve got regulators in the US trying to stop us, we’ve got the China problem, we’ve got a housing crisis looming, we’ve got interest rates going up, we’ve got inflation coming down the pipes, and I’m being told to spend time and time again looking at something that is going to happen in 20 or 30 years hence,” he said. “The proportionality is completely out of whack.”

Nicolas Moreau, chief executive officer of HSBC’s asset management unit, issued a statement disavowing Kirk’s speech. The remarks “do not reflect the views of HSBC Asset Management nor HSBC Group in any way,” he said. The bank’s Group Chief Sustainability Officer Celine Herweijer said Kirk’s comments are “absolutely not the company’s view,” speaking on the sidelines of an ESG summit in London hosted by Saudi Arabia’s Future Investment Initiative Institute.

Kirk’s speech has already led some wealth managers to consider shunning HSBC’s asset management products. “We don’t have any HSBC sustainable products in our portfolios at the moment and this didn’t help at all,” said Damien Lardoux, head of impact investing at EQ Investors.

Climate change is a particularly sensitive issue at HSBC after it faced a warning from the UK’s advertising watchdog over greenwashing. The Advertising Standards Authority found the bank misled customers in two ads published in October, the Financial Times reported earlier this month. The bank is responding to the ASA’s draft recommendations, according to the FT.