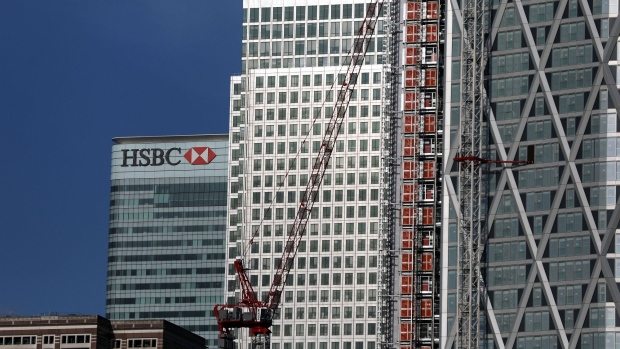 A construction crane stands near the offices of HSBC Holdings Plc, left, next to One Canada Square skyscraper, center, in the Canary Wharf business, financial and shopping district in London, U.K , Bloomberg

Seymour will become president and chief executive officer of HSBC Canada, effective Sept. 1, the London-based bank said Monday in a statement. Seymour is currently an executive vice president in Canada and has held progressively senior roles in commercial banking, retail and wealth, operations and risk since joining HSBC in 1988 as a graduate trainee in commercial banking.

Seymour, a Canadian, said she’ll continue a growth strategy in the nation after navigating through the uncertainty of the COVID-19 pandemic.

“If you look at where the bank was prior to COVID, we had made great inroads in growing our market share in all our lines of businesses, ” Seymour, 53, said in a phone interview. “The plan is to get back on track with that growth in market share -- I think there’s going to be a real opportunity for us.”

Seymour has been head of commercial banking in Canada since 2012, overseeing a division that accounts for the majority of the bank’s Canadian profits and ranks among HSBC’s top-performing commercial regions, with a focus on helping businesses expand across the world’s trade corridors.

“Some of our unique capabilities with our global footprint will really play well to helping our clients and to navigating what the future COVID world looks like,” she said.

Seymour, who grew up in an entrepreneurial family in a small town in New Brunswick, cites client relations as one of her key strengths.

“The ability to see things through the customer lens is very important and to be able to do that now as a CEO is pretty powerful,” she said. “If you talk to most people I think they’d tell you that’s one of my personality traits -- I’m very much looking forward to taking that across the rest of the bank.”

Seymour will be taking over from Stuart, 56, who has headed the Canadian operations for five years.

“As CEO, she led the Canadian business through a period of significant change and growth with assets now sitting at $125 billion,” or US$92 billion, said Stephen Moss, regional CEO for Europe, the Middle East, North Africa, Turkey, Latin America and Canada. “We are confident that Linda will build on HSBC’s position as the leading international bank in Canada and a significant contributor to the group.”