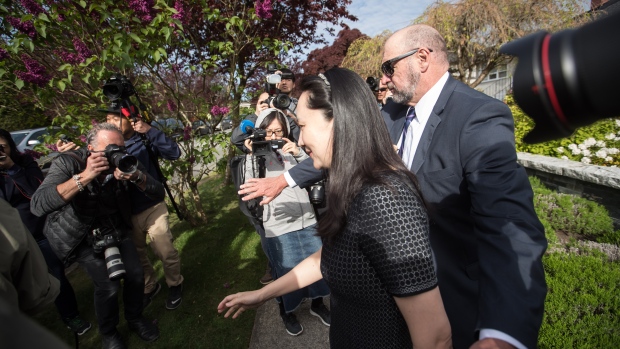 Huawei chief financial officer Meng Wanzhou, centre, who is out on bail and remains under partial house arrest after she was detained Dec. 1 at the behest of American authorities, is accompanied by a private security detail as she leaves her home to attend a court appearance in Vancouver, on Wednesday May 8, 2019. , THE CANADIAN PRESS/Darryl Dyck

Huawei Technologies Co. Chief Financial Officer Meng Wanzhou was denied her constitutional rights when she was detained for three hours at the Vancouver airport in December before her arrest at the request of U.S. authorities, her lawyers said.

Meng’s detention amounted to an “abuse of process,” according to her lawyers, who are seeking to delay U.S. attempts to extradite her on fraud charges over dealings with Iran. Her lawyer, Scott Fenton, also said comments by President Donald Trump about the case amounted to “political abuse.”

An executive at China’s biggest telecommunications firm, Meng was released on $10-million bail in December and is living with her husband and youngest daughter at one of the family’s two luxury homes in Vancouver. She speaks regularly by phone to her father, Hauwei’s billionaire founder Ren Zhengfei.

Crown lawyer John Gibb-Carsley told the Supreme Court hearing in Vancouver Wednesday that Meng wants to move from her house valued at $5 million to her other $13.3-million residence. The judge granted that request.

Meng’s defence lawyers seek to discredit the U.S. handover request and argue Canada improperly arrested her. Those matters must be dealt with before extradition hearings can begin, her defense has said. Her next court date was set for Sept. 23.

The finance chief’s lawyers are also seeking additional disclosure about the details of the U.S. case. Meng sued the Canadian government in March for allegedly trampling her constitutional rights during her arrest, in an effort to discredit the extradition case. Meng has been under house arrest since December.

Meng entered the court at about 10 a.m. Vancouver time, wearing a long black dress and black blazer, carrying a dark blue Chanel handbag. Her husband, Liu Xiaozong, wearing a brown velvet jacket, sat in the first row of the public gallery, where about 140 people gathered.

The U.S. accuses her of tricking banks, including HSBC Holdings Plc, into conducting transactions that potentially violated U.S. sanctions on Iran. She faces multiple criminal charges, including fraud. Last week, U.S. prosecutors filed a motion seeking to disqualify one of Huawei’s lead defense lawyers, James Cole. Cole was the U.S. deputy attorney general from 2011 to 2015, a period which coincides with when the Justice Department was collecting evidence in the fraud and sanctions-related case.

The politically explosive proceeding could take years, and history shows that if Canada follows the letter of its law, Meng will probably be extradited. That said, she appears to be gearing up for a legal offensive.

In addition to the abuse of process claim, her lawyers are citing “double criminality.” The U.S. has charged Meng with fraud, alleging she lied to banks to trick them into conducting transactions for Huawei that may have violated U.S. sanctions. Her defense argues that in Canada, the banks wouldn’t have been breaking any laws because the country doesn’t have such sanctions. Crown attorneys dismissed that as a “red herring” as the alleged crimes relate to her misrepresentations to banks.