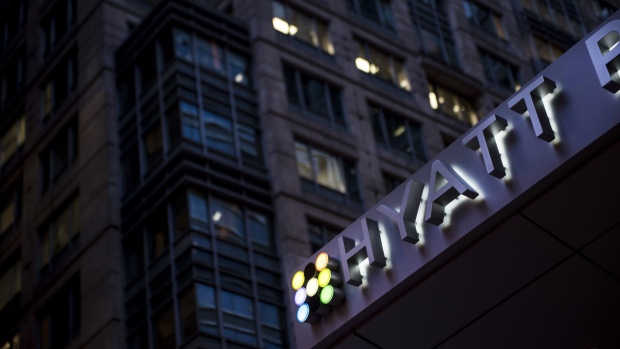 Hyatt Hotels Corp. reported second-quarter results that show just how deep the pain from travel bans and hotel closures have been for the lodging industry.

Revenue per available room, a measure of rates and occupancy, fell 89 per cent worldwide in the period, according to a statement Monday.

The company reported an adjusted net loss of US$183 million, or US$1.80 a share. Analysts were expecting a loss of US$137 million on average. The company’s shares dropped on Tuesday in in New York.

Hyatt’s hotel portfolio skews toward full-service properties that are more likely to depend on group meetings and corporate travel. That helps explain why Hyatt’s results lagged Wyndham Hotels & Resorts, whose roadside motel brands saw RevPar decline by 54 per cent from the year-ago period.

The recent spike in coronavirus cases has weighed on what was a nascent travel recovery in the U.S. Hyatt said RevPar was down 76 per cent in July compared with a year earlier. Hotel bookings had increased gradually during the quarter as vacationers embarked on road trips to regional destinations.

Hyatt said it has enough liquidity to “fund operations for at least the next 36 months” even if room demand stays at second-quarter levels. The company has spent recent months conserving cash by laying off corporate employees and lining up new credit facilities.

Hyatt shares dropped at much as 4.9 per cent to US$45.62 on Tuesday. The stock had plummeted about 47 per cent this year through Monday’s close.