IBM’s US$33 billion purchase of Red Hat Inc. -- the world’s second-largest technology deal ever -- is aimed at catapulting the company into the ranks of the top cloud software competitors.

The cash deal, IBM’s largest, boosts the company’s credentials overnight in the fast-growing and lucrative cloud market — and gives it much-needed potential for real revenue growth. The 107-year-old computer-services giant, once synonymous with mainframe computing, has been slow to adopt cloud-related technologies and has had to play catch-up to market leaders Amazon.com Inc. and Microsoft Corp. in offering computing and other software and services over the internet. 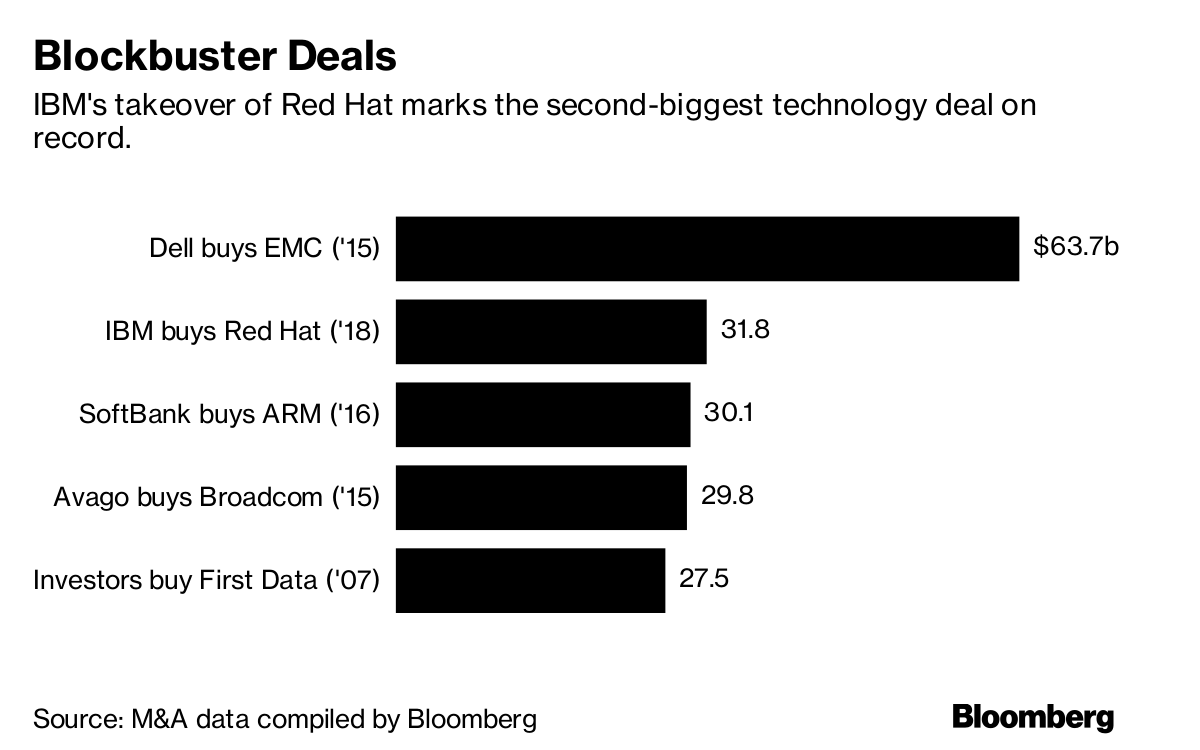 “We’ve been reshaping IBM for this moment,” Chief Executive Officer Ginni Rometty said in an interview with Bloomberg TV on Monday. “This is all about resetting the cloud landscape and this is the inflection point to do it.”

IBM has been positioning itself as a leader in the so-called “hybrid cloud” market -- in which companies run programs on both their own internal servers and the big “public” cloud providers -- Amazon’s AWS and Microsoft’s Azure -- at the same time. Red Hat, which sells software and services based on the open-source Linux operating system, helps companies bridge different platforms.

IBM has seen revenue decline by almost a quarter since Rometty, 61, took the CEO role in 2012. While some of that has been from divestitures, most is from declining sales in existing hardware, software and services offerings, as the company has struggled to compete with younger technology companies. She has been trying to steer IBM toward more modern businesses, such as the cloud, artificial intelligence and security software with inconsistent results.

In its third-quarter earnings report, IBM disappointed investors who were seeking more progress in those areas after six years of declining sales that had only recently started to show gains. Still, the improvements had been coming largely from IBM’s legacy mainframe business, rather than its so-called strategic imperatives. Cloud revenue grew 10 per cent in the period to US$4.5 billion, but that was slower than the 20 per cent expansion in the second quarter.

The Red Hat deal could signal to investors that IBM wasn’t as well positioned in cloud as it had been claiming, said Jim Suva, an analyst at Citigroup Research.

“We expect investor skepticism around the deal given IBM’s messaging that it is well underway in its transformation,” he said.

Investors have grown impatient as the stock has dropped 31 per cent over the last five years. Warren Buffett virtually gave up on IBM last year. His conglomerate, Berkshire Hathaway Inc., cut its stake in the company by 94 per cent, while increasing its investment in Apple Inc.

The Red Hat deal represents an admission by Rometty that in-house growth wasn’t going to be enough to keep IBM from falling permanently behind in a market that is growing in importance and size.

Still, analysts said the deal is unlikely to improve IBM’s chances of winning the Pentagon’s US$10 billion cloud contract, known as the Joint Enterprise Defense Infrastructure cloud or JEDI. The project is widely seen to favor Amazon because it’s the dominant cloud services provider and already won a major cloud contract from the Central Intelligence Agency.

IBM will pay US$190 a share in cash for Raleigh, North Carolina-based Red Hat, according to a statement from the companies Sunday, confirming an earlier Bloomberg News report. That’s a 63 per cent premium over Red Hat’s closing price of US$116.68 per share on Friday.

Rometty said IBM “paid a very fair price. This is a premium company. If you look underneath, this is strong revenue growth, strong profit strong free cash flow,” she said.

IBM will suspend its share buyback program in 2020 and 2021. The company plans to pay for the acquisition with a combination of cash and debt, and said it is committed to maintaining strong investment-grade credit ratings. IBM has about US$14.5 billion of cash and equivalents on its balance sheet, according to data compiled by Bloomberg.

Revenue at Red Hat, is expected to top US$3 billion for the first time this year as the company’s Red Hat Enterprise Linux product attracts business from large customers. Last quarter the company reported a record 11 contracts valued at over US$5 million each and 73 over US$1 million, according to a note from JMP Securities analyst Greg McDowell.

Armonk, New York-based IBM will continue to grow its dividend and neither company will cut jobs after the deal, Rometty said.