IBM agreed to acquire software maker Red Hat Inc. in a US$33.4 billion bet on jump-starting its efforts to catch up in the cloud.

International Business Machines Corp. will pay US$190 a share in cash for Raleigh, North Carolina-based Red Hat, according to a statement from the companies Sunday, confirming an earlier Bloomberg News report. That’s a 63 per cent premium over Red Hat’s closing price of US$116.68 per share on Friday.

"The acquisition of Red Hat is a game-changer. It changes everything about the cloud market," said Ginni Rometty, IBM’s chairman and chief executive officer, in the statement.

Rometty, 61, has been trying for years to steer the 107-year-old technology giant toward more modern businesses, such as the cloud, artificial intelligence and security software.

In its third-quarter results, IBM disappointed investors who were seeking more progress in those areas after six years of declining sales that had only started to show gains earlier this year. The improvements had been coming largely from IBM’s legacy mainframe business, rather than its so-called strategic imperatives.

The Red Hat purchase will give IBM an immediate cloud revenue boost growth as well as a suite of proven software products to sell through its global sales force.

“We will scale what Red Hat has deeply into many more enterprises than they’re able to get to,” Rometty said in a phone interview.

Revenue at Red Hat, which sells software and services based on the open source Linux operating system, is expected to top US$3 billion for the first time this year as the company’s Red Hat Enterprise Linux product attracts business from large customers. Last quarter the company reported a record 11 contracts valued at over US$5 million each and 73 over US$1 million, according to a note from JMP Securities analyst Greg McDowell.

IBM, which has a market valuation of US$114 billion, has seen revenue decline by almost a quarter since Rometty took the CEO role in 2012. While some of that has been from divestitures, most is from declining sales in existing hardware, software and services offerings, as the company has struggled to compete with younger technology companies.

Rometty said IBM “paid a very fair price. This is a premium company. If you look underneath, this is strong revenue growth, strong profit strong free cash flow“ she said.

IBM will continue to grow its dividend and neither company will cut jobs after the deal, Rometty said.

Red Hat makes IBM “a credible player in cloud now -- both private and hybrid cloud,” Bloomberg Intelligence analyst Anurag Rana said. “This gives them an asset that looks forward and not backwards.” 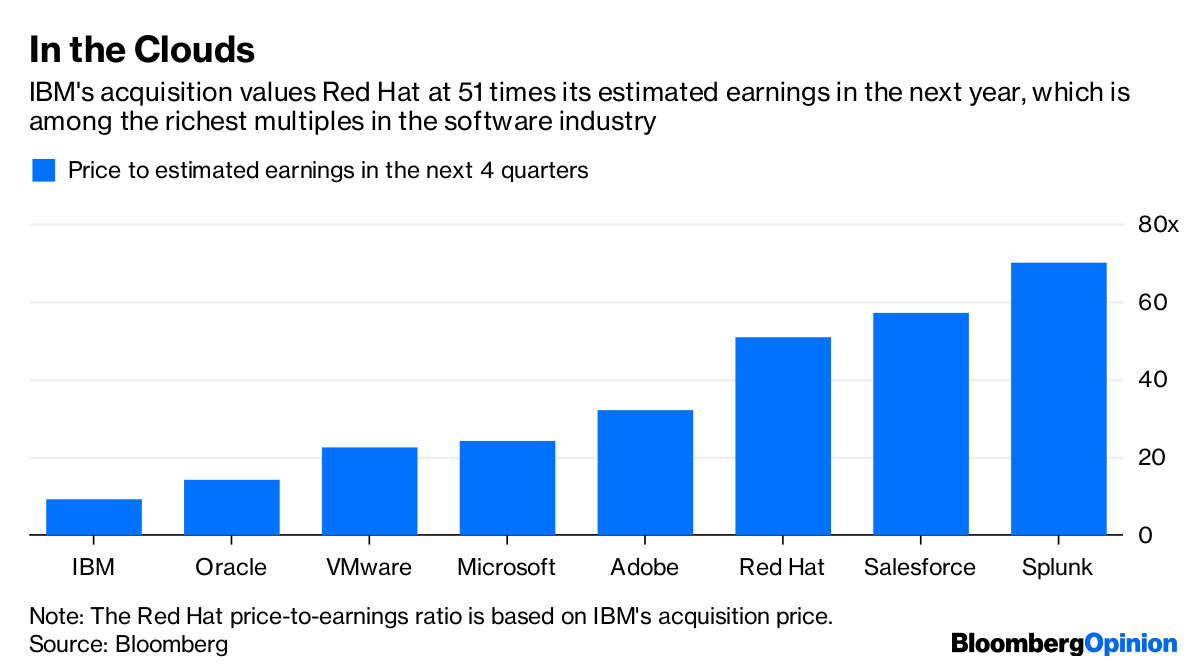