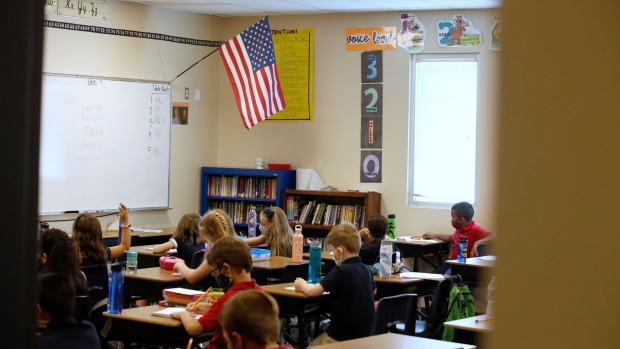 Students wear protective masks during a lesson at a public charter school in Provo, Utah, U.S., on Thursday, Aug. 20, 2020. Students and staff in Utah who don’t wear a mask in K-12 schools in accordance with the Governor Gary Herbert’s mandate can be charged with a misdemeanor, reported the Salt Lake Tribune. George Frey/Bloomberg , Bloomberg

(Bloomberg) -- For some students, going back to school could be deadly.

Rebecca Tabor is one. Three years ago, she had a heart transplant and takes medication that suppresses her immune system to keep her body from rejecting it. So when the University of Louisiana at Lafayette brought students back to campus this month, she concluded going back was too big a risk. Instead, she’ll take classes virtually from her parents’ home. For exams, though, she’ll still have to commute to campus, over two hours away.

Tabor is a senior and needs to take a science lab to graduate. That, along with any semblance of a normal 21-year-old’s life, will have to wait. A school spokesperson said it’s up to students with special needs to work out accommodations with professors or, if that doesn't work, contact administrators.

“I’ve had to do a lot of work to make sure everything is both safe and feasible for me to accomplish,” Tabor said.

Relatively little is known about how Covid-19 affects young people: research indicates that a small percentage may suffer long-term symptoms after infection. Advocates of reopening say that places like Northern Europe where classrooms never closed or opened with few problems show that the young are less likely to transmit the virus or get seriously ill. But teachers in many states have pushed back on efforts to refill classrooms, saying protective measures are inadequate. Those with health conditions that make them more vulnerable to Covid-19 see school as just one more way the pandemic has upended their lives.

On Friday, the Centers for Disease Control and Prevention updated guidance to recommend schools offer remote work or learning opportunities for anyone at higher risk due to other health conditions.

“Everyone's constraints are really different,” said Emily Oster, an economist at Brown University who has studied school reopenings. “We're all kind of facing a lot of choices, which we basically have no idea how to make.”

The concern has heightened as outbreaks force more schools to revert to remote learning. And for many like Tabor, even a small risk is a massive gamble.

Dave Kitzinger is a 64-year-old heart transplant recipient. His 15-year-old son “desperately wants” to go back when his suburban Pittsburgh high school reopens, but they’re worried. The district voted last week to stay on-line for the first nine weeks of the semester, though, giving them more time to consider the options.

“He wants to see his friends. He wants to be back in that environment. But he’s concerned he’s going to go and bring something home,” Kitzinger said. When contacted for comment, the superintendent said that anyone uncomfortable with in-person instruction will have a virtual option. Kitzinger said, though, that he feels going back remotely would be hard on his son. “It’s a crummy position to be in. I'm so concerned about him losing such a big part of his early adulthood.”

Shauna Perry works with immune-compromised patients in Maine as a nurse. Her husband recently received a transplant that resulted in complications, prompting them to rethink what to do as their daughter starts kindergarten. They needed a creative plan that lets Perry work without risking her husband’s or patients’ health. So their daughter will stream kindergarten classes from her preschool, which has just a few kids.

“There were no other options,” she said. “We don't have a lot of family support. I am the main income provider and I have our health insurance. So we really didn't have a choice.”

Her daughter’s kindergarten didn’t respond to requests for comment.

Perry, Kitzinger and Tabor are members of a Facebook group for transplant recipients, and what to do about schools is a regular topic. There’s no consensus, so participants share the plans they’ve cobbled together to help the others with ideas on how to protect their health without compromising education.

Nationally, about 61% of kindergarten through high school students will attend school virtually, according to a survey of public-school districts by Burbio, a New York-based data service. About 20% will have in-person classes and more than 18% are hybrid, Burbio found. One percent are undecided. About 75% of the top 700 U.S. universities plan to allow students on campus, even those staying online.

The CDC recommends schools prioritize bringing students back, but any decision needs to be based on local guidance. Mass testing isn’t recommended, while symptom screenings, masks and temperature checks are. President Donald Trump has pushed for all levels of schools to bring students back, saying “virtual is not as good as being there.”

But even low case numbers in the community don’t shield schools enough, according to Eric Topol, director of the Scripps Research Translational Institute. There isn’t enough testing and contact tracing in place to safely reopen for anyone, he said.

And “if you're immunocompromised, even if you're healthy, it's a risk,” he said.

In Muskogee, Oklahoma, Madison Shoemaker, 22, and her mother care for her 7-year-old niece, who was diagnosed in early March with primary immunodeficiency disorder and must avoid public spaces. “She can't even fight off a cold right now, so fighting off Covid is not an option,” Shoemaker said.

The district has a fully online option, but keeping the first-grader home means Shoemaker, who plans to finish college in December and has two jobs, has to cut back on work. “That's going to be a huge financial impact on us,” she said.

The district encourages masks for those in second grade and below and requires them above that age and said its E-Learning Academy will be available beyond this year. The “superintendent feels that providing an online option is part of the future of education,” according to an emailed statement.

“People want to get back to work,” she said. “They don't understand that there's other situations besides their own that are much more complicated.”

The nuances of these situations generate lots of tension, Oster said.

For Nancy Souza, a 58-year-old special-education teacher from Manteca, California, going back to work has meant socially distancing from her husband, who has brain cancer.

The district has brought teachers back while students attend remotely, since “teachers deserve to have equitable access to their learning environment and all the resources and tools unique to their subject area,” said Victoria Brunn, the district’s community outreach director. Souza’s assistants are required to wear masks and socially distance in the classroom, measures that her husband’s doctor said lowered the risk enough for her to return.

But two weeks ago, an assistant tested positive and they had to self-isolate. Since then, she’s kept away from her husband and slept in a different room. Souza said her principal allowed her to shift to online. Thirty-five others have also been allowed to work from home, Brunn said.

“We didn't even go back to school with students and we are already on quarantine,” Souza said. “If I can't even go to school with adults using precautions, then how am I supposed to be able do that with 16 students?”