Canada may be the first developed country to legalize cannabis, but the country lags far behind the U.S. when it comes to growing a robust marijuana startup industry.

Globally, 125 venture and private equity investments were made in the cannabis sector since the first quarter of 2013 to the second quarter of this year, according to data provider Refinitiv. Of those investments, 97 were toward U.S. companies, the data shows.

"Opportunity is everywhere, but what's important is to identify where a market is in its cycle. If you ask me where Canada is, I'd say it's in the eighth inning," said Matthew Nordgren, managing director of the Arcadian Fund, a Los Angeles-based venture capital firm, in a phone interview.

The total amount of investments in cannabis startups is more than US$1.48 billion globally, 92 per cent of which were earmarked toward U.S.-based firms, according to Refinitiv. Only about US$98 million was invested in Canadian companies. 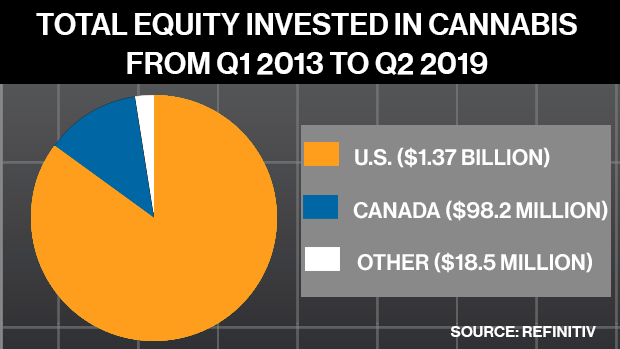 That pool of global venture capital should substantially increase in the next year with firms looking to raise increasingly more funds, such as Measure 8 Venture Partners LP – an early investor in Curaleaf Holdings Inc. – raising US$100 million in financing.

But Canada – despite being the home of dozens of cannabis producers thanks to government policies that allowed for large- scale cultivation facilities across the country – may continue to be left out in the dust. Although production is now assured in Canada, it's unlikely that the country's next-stage of cannabis companies can take advantage of venture financing, several VCs told BNN Bloomberg. 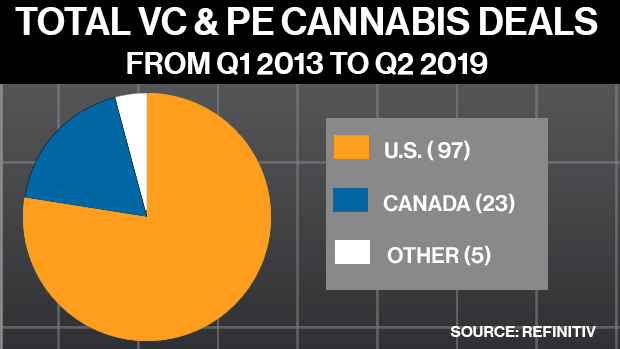 "The opportunity for Canada today is relatively small for a big company," Nordgren said, whose fund has invested more than US$25 million in 17 cannabis companies, including some in Canada such as Wurk and Treez. "There's not a lot of people or tourism here."

Codie Sanchez, managing director of Cresco Capital Partners, which operates a US$100-million fund dedicated to the cannabis industry, said she doesn't expect to make any big investments in Canada.

"In the U.S., I can get such better valuations for those U.S.-based companies because they’re capital-starved," she told BNN Bloomberg in an interview.

"From my perspective, I would stay focused in the U.S. market where I can still get that kind of [price] dislocation still, but I would be open to a deal in Canada if the company wasn’t worth an incredible sum."

Narbé Alexandrian, chief executive officer of Canopy Rivers Inc., the venture capital arm of the world’s biggest cannabis producer Canopy Growth Corp. (WEED.TO), said there's a large amount of capital in Canada sitting on the sidelines despite the opportunity still to be had in the country. The company has deployed about two-thirds of the $280 million it’s raised toward 16 pot-focused startups, mostly in Canada and the U.S.

"There's a lot of interesting things in Canada, but the risk-reward here isn't as favourable as what we've seen in the U.S. and Europe," Alexandrian told BNN Bloomberg in a recent phone interview.

"The U.S. is a bit bonkers right now," Alexandrian said. "It's like Canada was a few years ago, where you could have paid anything just to get into the industry."