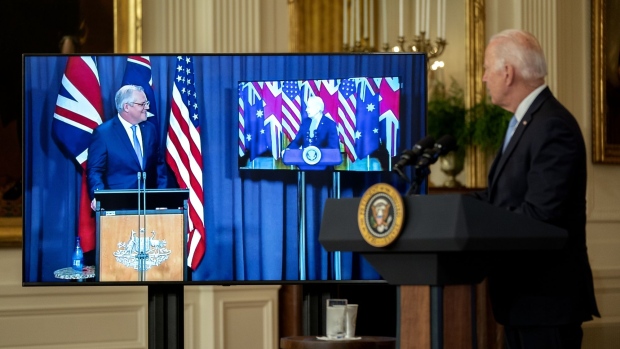 U.S. President Joe Biden listens as Scott Morrison, Australia's prime minister, speaks via videoconference in the East Room of the White House in Washington, D.C., U.S., on Wednesday, Sept. 15, 2021. Australia is joining a new Indo-Pacific security partnership with the U.S. and U.K. that could pave the way for it to acquire nuclear-powered submarines, likely signaling the end of its deal with France to buy conventional craft. , Bloomberg

(Bloomberg) -- Indonesia sounded its caution after neighboring Australia struck a deal with the U.S. and U.K. to build nuclear submarines, a move that has angered China.

“Indonesia is deeply concerned over the continuing arms race and power projection in the region,” the foreign ministry said in a statement. The country calls on Australia to meet its nuclear non-proliferation obligations and to uphold the rule of law as set out in the United Nations Convention on the Law of the Sea 1982, or UNCLOS.

Australia announced the partnership with the U.S. and U.K. to get nuclear-powered submarines, a bid by the U.S. allies to counter China’s rising military might in Asia-Pacific waters. Indonesia, the world’s largest archipelagic nation that sits between Australia and China, has sought to temper tensions in the region by holding talks and refraining from making a formal claim in the disputed South China Sea.

Neighboring Singapore struck a neutral tone instead, with Prime Minister Lee Hsien Loong saying the city-state hopes the deal “would contribute constructively to the peace and stability of the region and complement the regional architecture,” according to a statement on Lee’s phone call to Australian Prime Minister Scott Morrison on Thursday.