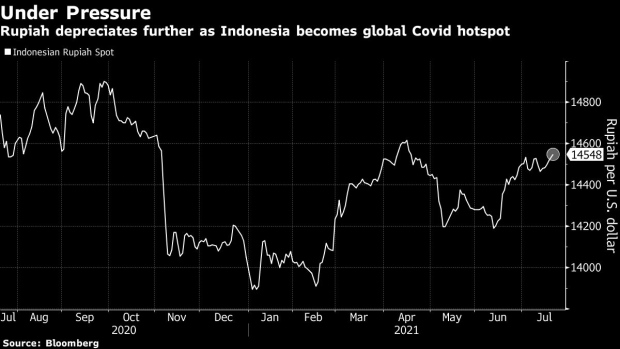 Sign for coronavirus prevention measures displayed at Kebayoran Lama market in Jakarta, Indonesia, on Thursday, July 15, 2021. Indonesia is speeding up vaccination to reach herd immunity as the highly infectious delta variant of the coronavirus continued to tear through the country. Photographer: Dimas Ardian/Bloomberg , Bloomberg

(Bloomberg) -- Bank Indonesia will likely keep the policy rate at a record low for a fifth straight meeting Thursday as the nation becomes one of the world’s coronavirus hotspots.

Indonesia’s central bank is expected to hold its seven-day reverse repurchase rate at 3.5% on Thursday, according to all 29 economists surveyed by Bloomberg. Governor Perry Warjiyo slashed the bank’s 2021 economic growth estimate earlier this month as a sharp spike in Covid-19 cases and fatalities triggered lockdown measures in parts of the country.

While weakening demand sent inflation to a 10-month low in June, Indonesia has little room to lower rates further without undercutting the rupiah. The local currency has fallen more than 2% since the last rate-setting meeting June 17, fanned by fears that the fast-spreading delta variant could lead to the sort of massive outbreaks that beset India and Brazil. The sell-off is worsened by signals the U.S. Federal Reserve could soon start discussing monetary tightening.

Here’s what to look out for in Thursday’s decision:

The most pressing concern is how the government plans to tackle Indonesia’s Covid situation. President Joko Widodo has veered away from imposing a full lockdown throughout the pandemic, allowing the economy to avoid the worst-case fallout. Given the scale of the current surge, however, the government this time may need to prioritize a firm virus-containment strategy.

Widodo has extended stringent movement curbs until July 26, but has indicated they could be eased after that if daily cases and hospital occupancy rates decline. According to Nicko Yosafat, economist at PT Ciptadana Sekuritas Asia, the market would have reacted positively to a longer extension, as it was widely expected virus curbs would remain until the end of the month.

“We believe loosening the lockdown at a time when the likelihood of a resurgence of Covid-19 cases remains high will lead to greater total economic damage than sustaining the current lockdown to eliminate the resurgence risk,” Yosafat said. “It is better to sacrifice the economic benefit in short run to gain higher economic benefit in the long run.”

Investors will want insight into how Bank Indonesia sees the virus resurgence impacting the economy. The central bank estimates gross domestic product could expand 3.8% this year if restrictions are kept on for a month, down from a previous estimate of 4.1%-5.1%. The consumption-driven economy will likely be hit hard as movement restrictions limit travel and business operations, Warjiyo said July 12.

The government has lowered its growth target for the year to 3.7%-4.5%, while debt watcher S&P Global Ratings and lenders have followed suit. Economists warn of a protracted virus fight that could leave long-term scars on productivity. Indonesia already lost its upper middle-income status after poverty and unemployment worsened last year.

Prior to the latest Covid wave, consumer confidence had risen to a pandemic high last month, though manufacturing activity saw a slight dip. Exports have proved resilient, posting annual growth of over 50% in June and marking 14 straight months of trade surpluses on robust demand for commodities, particularly oil and gas.

While rate cuts are off the table, investors will want to know if Bank Indonesia can do more to cushion the blow, ING Groep NV economist Nicholas Mapa said. The central bank could detail macroprudential measures or consider doing more to support government borrowing down the line, he said.

Bank Indonesia could also extend financing support for micro-, small and mid-sized enterprises, considering that they tend to bear the brunt of movement restrictions, according to PT Bank Permata economist Josua Pardede. “Supporting MSMEs means also supporting economic recovery, considering they contribute to about 60% of Indonesia’s GDP,” he said.

Bank Indonesia has warned of rising pressure on the rupiah and has committed to stabilizing it. The currency saw a bout of strength in the second quarter due to a retreat in U.S. Treasury yields, but this will likely be short-lived as the virus spike and the Fed’s taper talk spur portfolio outflows, said Enrico Tanuwidjaja, economist at PT Bank UOB Indonesia.

The central bank may need to draw down its foreign-exchange reserves or intervene in domestic markets to ease some of the selling pressure, Tanuwidjaja said. He expects the rupiah to drop to 14,700 to the U.S. dollar this quarter, then weaken to 14,800 a dollar through the first quarter of 2022.