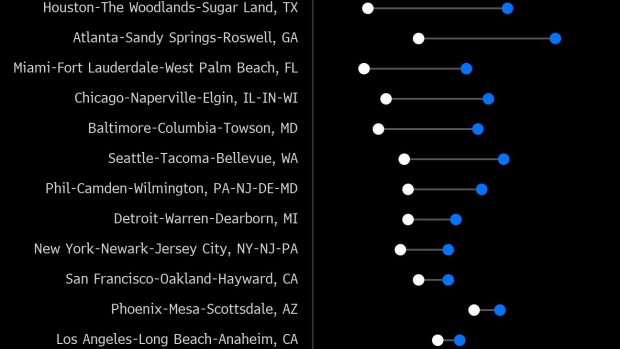 (Bloomberg) -- Inflation rates across the U.S. have diverged in the pandemic, with some cities far outpacing the national average while in a handful of others there’s been hardly any acceleration in prices.

Inflation in Atlanta was running at 6.6% in August, according to Labor Department data published this week. That’s close to double the rate in cities like San Francisco or Denver -- where prices are rising at about the same pace as they were before the pandemic -- and New York.

Much of the gap is likely explained by housing markets, which have been upended by pandemic relocations and the rise of work-from-home. Tampa and Riverside, California, with some of the highest inflation rates, have seen sharp increases in rental costs.

There could be a broader impact from migration trends, some of which pre-date Covid. In faster-growing cities there’s more spending power to push prices up.

“We expect more demand pressure in the Sun-Belt regions where population is shifting towards,” says Steve Reed, an economist at the Bureau of Labor Statistics.

While cities like Tampa and Atlanta already had relatively high inflation before the pandemic, others -- such as St. Louis and Dallas -- have gone from being some of America’s lowest-inflation metro areas to among the highest.

The level of car use is likely another driver of regional discrepancies. Cities where gasoline has a lower weight in local cost-of-living indexes -- San Francisco and New York, for example -- have seen smaller changes in the inflation rate because they’re less affected by the surge in pump prices.