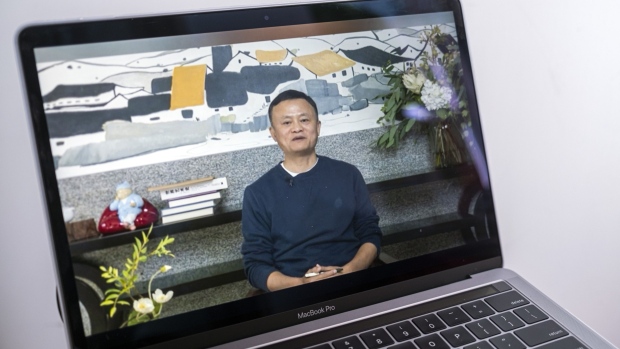 A video recording of a livestream of Jack Ma, co-founder of Alibaba Group Holding Ltd., addressing teachers at an annual event he hosts to recognize rural educators, on a laptop computer arranged in Hong Kong, China, on Wednesday, Jan. 20, 2021. Ma has resurfaced after months out of public view that fueled intense speculation about the plight of the billionaire grappling with escalating scrutiny over his internet empire. , Justin Chin/Bloomberg

He appeared for less than a minute and said nothing about the Chinese government clampdown that had left his business empire in crisis.

But for investors who’d been waiting months to catch a glimpse of Jack Ma, the entrepreneur’s participation in a live-streamed video conference on Wednesday was enough to trigger a US$58 billion sigh of relief. That’s how much Alibaba Group Holding Ltd.’s market value soared after a clip of Ma speaking to a group of teachers began circulating online -- his first public comments since disappearing from view late last year.

Much about the future of China’s most famous businessman remains unclear. Yet analysts said Wednesday’s video was a sign that worst-case scenarios -- such as jail time for Ma or a government takeover of his companies –- are probably now off the table. It’s unlikely Ma would have participated in the event without at least tacit approval from Beijing; state-run media including the Global Times were among outlets that posted snippets of his talk or wrote stories about his appearance.

“There’s still a lot of uncertainty on regulators’ next moves, but this does mean the status of Jack Ma is much better than a lot of people speculated,” said Fang Kecheng, a professor at the Chinese University of Hong Kong.

Ma’s talk focused on philanthropic issues including the importance of narrowing income disparities and reviving China’s countryside, two big priorities for Xi Jinping’s Communist Party. While far from a mea culpa, the comments offered a stark contrast to Ma’s last public remarks in October, when the billionaire launched into an unusually strong rebuke of Chinese regulators and state-owned banks.

Just a few days after that now-infamous speech at the Bund Summit in Shanghai, the government torpedoed Ma’s plan to take Ant Group Co. public in what would have been the world’s biggest-ever initial share sale. In the weeks that followed, authorities called for an overhaul of Ant’s business and began an antitrust probe of Alibaba.

Few expect Ma’s change of tone will cause Beijing to back off its campaign to more tightly regulate Ant, Alibaba and the rest of China’s high-tech giants. But Wednesday’s market response suggests investors are beginning to price out the risk of a crackdown that would put the country’s richest entrepreneurs and most innovative companies in serious jeopardy.

“Alibaba is not out of the doghouse, but at least it’s clear that the current anti-monopoly drive is not about punishing Jack Ma,” said Zhang Fushen, senior analyst at Shanghai PD Fortune Asset Management.

Speculation about Ma’s whereabouts had intensified in recent weeks after it emerged that he skipped the recent taping of a Shark Tank-like TV program that he had created. Chinese authorities have in the past quietly detained billionaires that run afoul of the Communist Party.

Ma’s resurfacing appeared to be carefully calibrated, according to Justin Tang, head of Asian research at United First Partners in Singapore. The video conference was part of an annual event Ma hosts to recognize rural teachers. A former English teacher himself, Ma spoke in a solemn tone about the need to create better education opportunities in China’s poorer areas.

“Recently, my colleagues and I have been studying and thinking. We made a firmer resolution to devote ourselves to education philanthropy,” Ma said. “Working hard for rural revitalization and common prosperity is the responsibility for our generation of businessmen.”

It was “the perfect setting for Jack to reappear in the public spotlight,” Tang said. “The backdrop sees Jack in his roots as a humble school teacher versus being a haughty entrepreneur that doesn’t know his place. The whole scene allows him to show contriteness without being scripted.”

Ant, which is controlled by Ma and part-owned by Alibaba, confirmed the authenticity of the video but declined to comment further.

Ant had suffered a “considerable shock” after Beijing suspended its stock market listing, an event that was expected to value the company at over US$300 billion, said James Anderson, a partner at Baillie Gifford, a significant investor in Alibaba. “It’s plain that there are less chances of it being extraordinarily profitable than there were before,” he told Bloomberg TV.

The big question facing investors now: to what degree will Beijing keep tightening the screws on Ant, Alibaba and its peers? The early evidence suggests regulators aren’t in a hurry to let up. Just a few hours after Ma’s reappearance, China’s central bank released draft rules to curb market concentration in online payments, potentially dealing another blow to Ant and rival Tencent Holdings Ltd.

The move is part of a wide-ranging campaign to rein in a generation of Chinese tech giants that Beijing views as wielding too much control over the world’s second-largest economy.

Despite the regulatory overhang, Alibaba bulls at firms including Amber Hill Capital Ltd. and Pegasus Fund Managers Ltd. said easing concerns over Ma’s status might be enough to lift shares of the e-commerce company back toward its record high in October. That would imply a gain of about 15 per cent in the Hong Kong-listed shares from their close on Wednesday.

Mitchell Green, a founding partner of Lead Edge Capital who holds shares of Alibaba, expects Ma to focus primarily on charity work going forward, a shift that began a few years ago. Green said he’s still optimistic about the long-term prospects for both Alibaba and Ant. “Both are very important to China’s economy and its people,” he said.