In the 15 years after Amazon.com Inc. went public in 1997, Jeff Bezos sold about a fifth of the company for roughly US$2 billion. In just the past week, he sold 0.2 per cent of the retailer for US$1.8 billion.

Bezos offloaded 905,456 Amazon shares on Friday and Monday under a pre-arranged trading plan, according to filings. That brings his total stock sales to about US$12 billion, with two-thirds of those occurring in the past four years, according to calculations by Bloomberg.

The scale of the recent sales — including US$2 billion in 2017 and US$2.8 billion in 2019 — partly reflects Amazon’s soaring valuation, which closed above US$1 trillion for the first time on Tuesday. That means Bezos’s remaining 11-per-cent stake is worth US$116 billion.

Their size and frequency though also reflects the changing needs of his increasingly public profile.

In the past few years, he’s had a style makeover and rarely been out of the headlines since he and MacKenzie Bezos divorced in 2019. That includes hitting the red carpet with girlfriend Lauren Sanchez, hosting a bash at his Washington mansion for the political and financial elite, and even being part of an international controversy after the incendiary claim that the crown prince of Saudi Arabia was involved in hacking his phone. 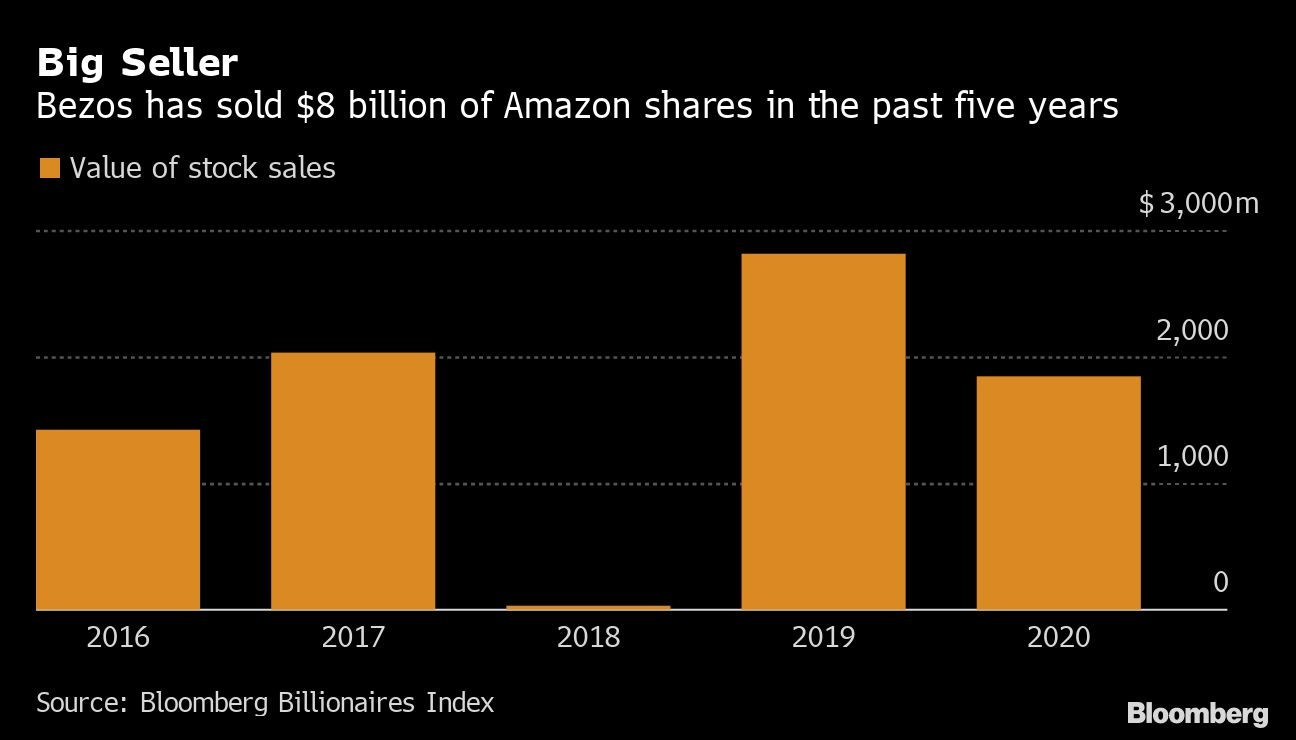 It’s a far cry from the low profile Bezos cultivated for years. Like fellow Seattle billionaire Bill Gates, he showed little interest in matching the glitzy lifestyle of other tech titans, such as Oracle Corp.’s Larry Ellison, whose purchases have included a Hawaiian island and super-yacht.

That doesn’t mean Bezos hasn’t spent boatloads of money. As well as properties on both coasts, he has his own rural getaway: 170,000 hectares of desert scrub in Texas, where he indulges his passion for space exploration. He’s previously said that he’s funding rocket company Blue Origin LLC with about US$1 billion a year through the sale of Amazon stock.

“The price of admission to space is very high,” Bezos said in 2018, accepting the Buzz Aldrin Space Exploration Award at the Explorers Club Annual Dinner. “I’m in the process of converting my Amazon lottery winnings into a much lower price of admission so we can go explore the Solar System.”

That still leaves plenty left over for other pursuits, from the Washington Post to a clock built in the Sierra Diablo mountain range in Texas that’s designed to run for 10,000 years. He’s also currently house hunting in Los Angeles, according to the New York Post.

His wealth is still soaring. The value of his remaining Amazon stock has climbed by US$11 billion this year.

--With assistance from Katya Kazakina and Meghan Genovese.