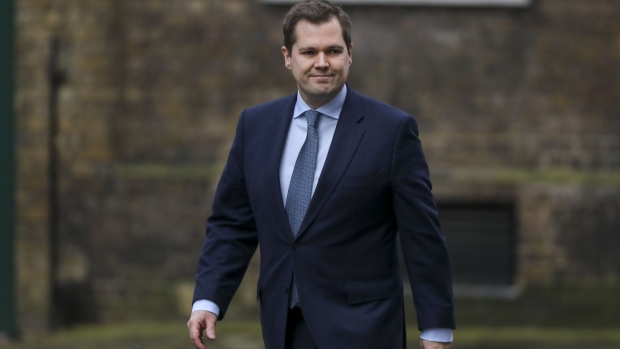 (Bloomberg) -- Boris Johnson stood by his Housing Secretary Robert Jenrick, who is facing growing questions over whether he expedited a real estate project by a businessman who later donated money to the Conservative party.

The prime minister considers the matter “closed,” his spokesman told reporters on Thursday after Jenrick released documents late the previous day showing he had exchanged text messages with the developer prior to the decision. The minister insisted he had behaved properly.

Though the story appeared on many newspaper front pages on Thursday and the opposition Labour Party said the minister still had questions to answer, Johnson’s government has a track record of refusing to give in to attacks on members of his administration. That’s likely to be no different in the housing secretary’s case, in which there are multiple factors at play.

Last month, Johnson refused to fire his chief adviser, Dominic Cummings, who was accused by large numbers of Tory MPs of undermining the government’s coronavirus lockdown strategy by driving his family the length of England when his wife developed Covid-19 symptoms. Not to give similar support to Jenrick on an issue that has attracted less attention risks confirming the impression in Tory minds that Johnson regards all of them as less important than his aide.

Jenrick was also one of the first ministers to publicly back Johnson for the Conservative leadership last year, in a joint article with Rishi Sunak, now Chancellor of the Exchequer, and Oliver Dowden, who is now Culture Secretary. Those moves were seen as a key signal that ambitious Tories were shifting to Johnson, who doesn’t have a huge longstanding base in the parliamentary party. The prime minister will not have forgotten his early supporters.

“In these things, what happens next depends on whether anything new comes out,” Conservative MP Bernard Jenkin told the BBC, adding that he expects Jenrick to survive the furor. “It looks as if he has put everything on the table. I suspect the storm will pass.”

There may even be an element of sympathy for Jenrick, who by his own account found himself sat without warning next to the developer, Richard Desmond, at a Conservative fundraising dinner last year, and was immediately subjected to determined and persistent lobbying.

Labour accused Jenrick of rushing through approval of Desmond’s project -- a 500-apartment, 44-story development at Westferry Printworks, a former printing plant in east London -- to help the businessman avoid paying a new community infrastructure levy that was to be imminently introduced. The charge would have cost Desmond at least 30 million pounds ($37 million).

A redacted email from a civil servant included in the documents published on Wednesday said Jenrick had been “insistent” on issuing a decision quickly, noting the upcoming tax change.

Desmond made a 12,000-pound donation to the Conservative Party two weeks after Jenrick issued the decision. The minister said he was unaware of that, but later reversed the decision after the local council sought a judicial review, conceding he had acted unlawfully.

“He rushed through the decision specifically to help the developer,” Labour’s Shadow Secretary for Communities and Local Government, Steve Reed, said in a statement. “The public must be reassured that there is not one rule for the Conservatives and their wealthy donors and another rule for everyone else.”

In his statement to the House of Commons on Wednesday, Jenrick channeled the Tory election manifesto when he said his motivation for initially approving the Westferry development was to boost the supply of housing “in a part of the country that is particularly unaffordable.”

“If one does this job properly one gets homes built, one does not necessarily make friends, and I don’t make apologies for that,” he said. “Each decision must be made on its merits, but if we want to tackle the housing crisis, we need to build homes.”

“There is no smoking gun here,” he told the BBC. “The intention was to get more housing built quickly for people that really need it. But when there was a perception of bias, Robert Jenrick pulled this thing and will allow a different minister to decide.”

Asked whether Desmond had enjoyed privileged access and what he would say to voters in the north of England who thought this looked unfair, Zahawi replied: “If people go to a fund-raiser in their local area, Doncaster, for the Conservative Party they’ll be sitting next to MPs, other people in their local authority. They can interact with different parts of the authority.”

Still, he insisted: “The access didn’t buy this billionaire a decision.”