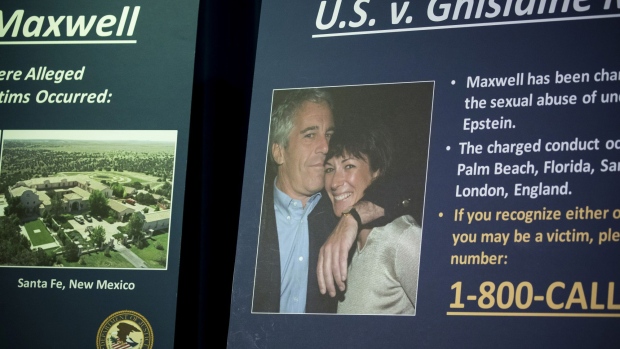 A photograph of Ghislaine Maxwell and Jeffrey Epstein is displayed during a news conference at the U.S. Attorney's Office in New York on July 2, 2020. , Photographer: Michael Nagle/Bloomberg

Prosecutors who are probing accused sex offender Ghislaine Maxwell haven’t identified the banks that helped her manage tens of millions of dollars.

One of them was JPMorgan Chase & Co., according to people familiar with the matter.

That’s another tie that Maxwell shares with Jeffrey Epstein, the late convicted sexual predator who was a longtime JPMorgan client. Epstein was known inside the biggest U.S. bank for helping steer many of his wealthy acquaintances to its private banking unit in New York, which offered discretion and tailored wealth management to rich clients.

Maxwell had US$10 million or more under management at JPMorgan Private Bank, according to two people with direct knowledge of the matter, one of whom said she was a client by 2009 or before. Her money there was handled by a team that included several dozen relationship managers, advisers and others who specialize in closely held businesses. The bank continued to work with her after Epstein moved funds to Deutsche Bank AG in 2013.

Maxwell’s finances are coming into focus after federal authorities in Manhattan accused her this month of conspiring with Epstein to sexually abuse minors, with prosecutors delving into how she funded her activities and lifestyle. Authorities require banks to provide a bulwark against financial crimes by filing reports of potentially suspicious activities. The reports aren’t made public.

The closely held business unit inside JPMorgan’s private bank works with clients who have substantial holdings in private businesses, real estate and trusts. There, Maxwell kept her money in a fairly conventional JPMorgan portfolio of equities and funds, according to the people with knowledge of the matter.

One of the people said Maxwell had accounts at JPMorgan until at least 2015. That same year, she became embroiled in civil litigation with a woman who claimed Epstein abused her as a minor and that Maxwell had functioned as his madam, allegations that Maxwell denied.

Following Maxwell’s arrest in New Hampshire this month, federal prosecutors said they have identified more than 15 bank accounts associated with her from 2016 to the present, including at banks based in the U.K. and Switzerland. The accounts held balances of more than US$20 million, they said.

Prosecutors also said that more than US$20 million was transferred from offshore accounts associated with Epstein to several associated with Maxwell between 2007 and 2011, with millions of dollars later transferred back. They didn’t identify any banks involved in the transfers.

Maxwell was ultimately cut off by at least one of her banks in 2019, her lawyer told a federal judge last week. He added that Epstein’s arrest last summer caused her bank at the time to drop her, forcing her to transfer hundreds of thousands of dollars to another institution. The lawyer didn’t identify the bank.

“When the bank drops you, you have to transfer your funds out. That’s true. That’s what happened,” her lawyer said.