The packaged-food giant’s charge to reduce the goodwill value of the Kraft and Oscar Mayer trademarks and other assets came with disappointing fourth-quarter earnings and an accounting subpoena from securities regulators. The charges resulted in a net loss of US$12.6 billion, or US$10.34 a share.

Formed in a 2015 merger orchestrated by Warren Buffett’s Berkshire Hathaway Inc. and the private equity firm 3G Capital, Kraft Heinz’s portfolio plays mainly in the center of the grocery store, an area hit hard by shifts in eating and shopping habits, and the one at greatest risk of being disrupted by Amazon.com Inc.

The company, led by Chief Executive Officer Bernardo Hees, has tried to spruce up a tired suite of brands -- from organic Capri Sun to natural Oscar Mayer hot dogs. But the bigger question in the mind of investors has been management’s ability to pull off the large, transformative deals that shareholders crave. 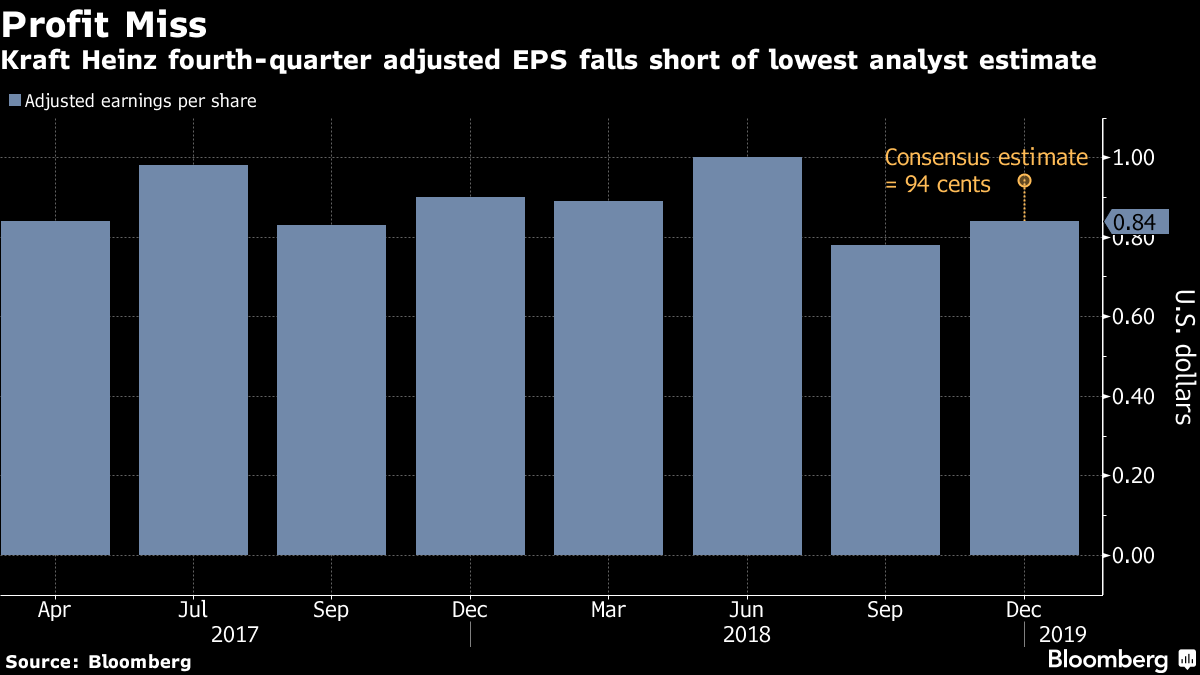 Kraft Heinz tried to purchase Unilever in 2017 in a move that would have allowed management to do what it does best: slash overhead costs. But Unilever rebuffed the US$143 billion deal, and Kraft Heinz shares have since lost about half their value as investors wait for the next big move.

On Thursday, the company’s fourth-quarter earnings missed even the lowest analyst estimate. It also flagged to investors in its quarterly results a subpoena it received last year from the U.S. Securities and Exchange Commission related to its procurement practices. Kraft Heinz said that as a result of an investigation with the help of an outside lawyer, it recorded a US$25 million “increase to costs of products sold.”

Berkshire Hathaway’s investment declined from a valuation of about US$15.7 billion to US$11.4 billion as the stock plunged to US$35 at 10:04 a.m. in New York. Thursday’s announcement marks the second time this year that a Berkshire holding has disclosed unfavorable news after the markets closed, hurting its stock. Apple Inc. trimmed its revenue outlook in January, which pummeled shareholders. That stock has since recovered.

Kraft Heinz will cut its quarterly dividend to 40 cents a share from 62.5 cents, helping it pay down debt more quickly and adjust to its smaller size after selling some businesses. The company had been paying out dividends at the highest ratio to earnings of its U.S. packaged-food peers.

Europe-based food giants, including Nestle SA and Unilever, traded down in sympathy Friday, against modest gains in European stock indexes.

Kraft Heinz’s bonds dropped the most relative to Treasuries in the company debt market on Friday morning. Risk premiums on the company’s most actively traded debt, US$1.1 billion of 4.625 per cent notes due in 2029, increased 0.27 per cent to 2.08 per cent, weakening by the most since the debt was issued last year.

The cost to protect against a Kraft Heinz default for five years surged 27.7 basis points to 107.9 basis points, the most since 2013.