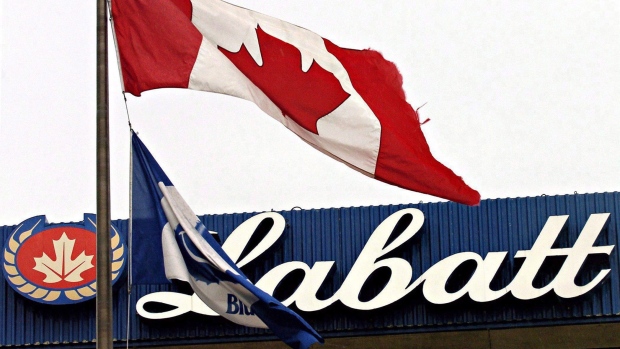 The Labatt brewery in Toronto , The Canadian Press/Aaron Harris

Labatt Breweries of Canada has acquired a distillery known for spirits and canned cocktails as the brewery looks to expand its ready-to-drink offerings -- a bright spot for a company grappling with a declining beer market.

Labatt announced Monday that it has acquired Delta, B.C.-based Goodridge & Williams. The distillery makes the Nutrl vodka and vodka soda drinks, along with several other spirits and mixed drinks.

"The ready-to-drink category in Canada has grown by double digits in recent years," said Labatt president Kyle Norrington in an email, citing industry data from the past three years that tracked the rise of pre-mixed drinks, like vodka sodas and gin and tonics.

The vodka soda market, in particular, saw triple-digit growth over the past three years, he said.

Spirits, which includes ready-to-drink products, maintained the largest portion of the Liquor Control Board of Ontario's sales in 2019, according to its most recent annual report. Spirits brought in $2.5 billion or 39 per cent of all sales.

That year, the province's spirits market grew 7.6 per cent, according to the LCBO report -- up 8.6 million litres to almost 122 million litres.

The pre-mixed and packaged cocktail segment doesn't show any signs of slowing down, said Norrington in a statement.

That presents a contrast to the overall beer industry. Domestic and imported beer sales fell 0.3 per cent from 2017 to 2018, according to Beer Canada, a trade association. Meanwhile, per capita consumption fell 1.2 per cent to 74.6 litres in 2018, according to its most recent figures.

That drop isn't new. In 2011, Canadian beer consumption per capita was 83.4 litres, according to a 2017 report from market-research firm Mintel. By 2016, it was 76.9 litres -- a trend the firm said partly came thanks to Canada's growing senior population drinking less beer.

Beer makers are embracing other alcoholic products, especially those in the rising ready-to-drink category, to combat sluggish beer performance.

That same Mintel report highlighted a growing interest in hard soda with a quarter of Canadians interested in consuming such a product.

The company will work quickly to push into the spaces of premium ciders, hard seltzer and CBD-infused, non-alcoholic drinks, said the company's CEO Gavin Hattersley at the time.

Labatt also jumped on this trend when, back in late 2015, the company announced it was adding ready-to-drink brands Mike's Hard Lemonade, Palm Bay and some ciders to its portfolio.

The G&W acquisition furthers its offerings in this space.

The distillery's Nutrl vodka soda was among the first products that responded to a shift in consumer preferences to low-calorie beverages, said Labatt's Norrington, also highlighting that the products lack added sugar and preservatives, and have a small number of ingredients.

The distillery's founder Paul Meehan said in an email "Nutrl is currently the fastest growing vodka soda ready-to-drink beverage and represents close to half of the vodka soda segment."

"Considering the growth of the category and the segment we see continued growth opportunities for this brand."

He will continue to lead operations there, and all 15 employees will retain their jobs. They will work to create new products.

"We know from G&W's track record and their speed in introducing new products to market that they will deliver amazing new ideas and brands over the years to come," said Norrington.

For competitive reasons, G&W can not disclose too much detail, but "we have an exciting lineup," wrote Meehan.

The distillery will continue to invest in its Tempo gin smash, which it launched late last year, "and other brands are in the pipeline," he said.

Labatt will help grow the distillery's products through its distribution channels, among other things. Nutrl vodka soda, for example, now sells in B.C., Alberta, Saskatchewan, Manitoba and Ontario.

With Labatt's help, "we will make the brand even more available across Canada," said Meehan.

Labatt, which is part of global brewing giant Anheuser-Busch InBev, and G&W did not disclose financial terms of the acquisition.

Norrington wouldn't speculate on whether the company is looking to make more acquisitions to boost its ready-to-drink offerings.

"However, we're always monitoring market trends and offering consumers choice by responding to their taste preferences in both our beer and ready-to-drink portfolios."