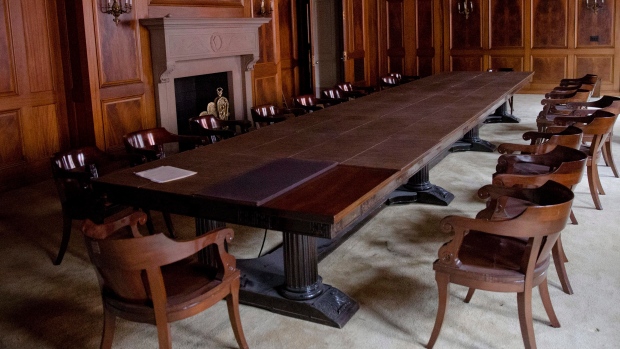 boardroom of the former Beneficial bank building and the future home of Drexel University's Thomas R. Kline School of Law, in Philadelphia. , The Canadian Press

Companies that hold out too long on adding their first female board member are more likely to pick one who’s already a director elsewhere, meaning she’ll have less time to devote to the firm, a Bloomberg Intelligence study found.

Lone female directors served on an average of about 1.4 boards, the busiest of all classes of directors, according to the research released Tuesday by Bloomberg Intelligence analyst Rob Du Boff, who described the phenomenon as “ovHERboardedness.”

For women on boards in the S&P 500 or Stoxx 600 with two or more female directors, there was little evidence the candidates had the same sorts of conflicts, Du Boff said.

“In companies where there was only one woman on the board, the number of average board seats was elevated,” he said. “The number of board seats for men was below average” for those boards.

As investor pressure in the U.S. and regulatory rules in Europe force more companies to add women to the board, particularly those without a single female director, advocates and opponents are watching to ensure that the burden of meeting the demand doesn’t end up falling to a small pool of women. The S&P 500 now has no boards without women. The Stoxx 600 has at least a handful, data compiled by Bloomberg shows.

In general, there is little sign that the quotas in Europe or the pressure in the U.S. is requiring women to work on too many boards, Du Boff said. Men and women, outside of the boards with only one female director, have about the same level of commitment, he said.

Rahul Bhardwaj, president and CEO of the Institute of Corporate Directors, joins BNN Bloomberg to discuss the importance of Canada's boardrooms keeping up with technology and creating stronger relationships.

There is no reason for women to become “overboarded” because there are thousands of women who have yet to serve on even one board as well as thousands serving on only one, said Meggin Thwing Eastman, research editorial director at MSCI, which tracks female directors. Of 16,000 women in the MSCI database of sitting directors, two thirds are only on one board, she said. Only about 13% of those women are on more than two boards, she added.

“The vast, vast majority are not overboarded or anywhere near it,” Thwing Eastman said. “There is this kind of myth out there that it must be the same women on all these boards because there aren’t enough women to become directors, which just isn’t true.”

MSCI estimates it will be 2029 before women represent 30 per cent of directors on the S&P 500, a threshold at which they will have more influence on the boards, she said. The progress is slowing -- in 2015 that milestone was projected to be met in 2027 -- and one reason may be that the boards that were most reluctant to add the first women are delaying adding a second, Thwing Eastman said.